Never say die Mayo come back from dead against Dublin 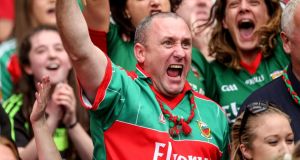 Mayo fans celebrate after their side scored a late penalty in their All-Ireland semi-final draw with Dublin. Photograph: James Crombie/Inpho

City and country will meet again next Saturday in Croke Park. Shades of 1985 as Dublin and Mayo clattered into one another in an absorbing and bruising All-Ireland semi-final which reached a breathless crescendo.

Not for the first time in recent years Mayo footballers showed they have no idea of how to accept they are beaten. They rescued this one with all the madness in their souls. It finished level – Dublin’s 2-12 to Mayo’s 1-15 – and safe to say ticket sales will be brisk for next weekend’s late matinee.

The last 10 minutes of this full house semi-final were an exercise in the kind of glorious last stands which have become the Mayo football trademark.

Just when everyone in the stadium believed the match was winding down – the Dubs seven points ahead with nine minutes to go and starting to have some fun – Mayo came roaring back.

Supporters in the upper house of Croke Park looked down to see men felled with cramps and fatigue, gasping for oxygen and water. And that was just in the ard comhairle. What was happening out on the football field was on an entirely different plane.

The emotions of the blue fans were shredded at this stage as they had watched Dublin’s handsome lead evaporate through a blazing 1-4 from Mayo in the last 10 minutes.

They will meet again on the eve of the All-Ireland hurling final: the hurling purists will be aghast at the idea of the green sward being subjected to a football stampede. Croke Park will be busy. The All-Ireland summer has arrived at last.

1 Johnny Sexton aware of how Ireland can offer fans an escape
2 Gerry Thornley: After 32 weeks the Six Nations is back up for grabs
3 Extremes of sweet and sour for Solskjaer as Man United show signs of revival
4 Arsène Wenger: Arsenal was a matter of life and death to me
5 Stockdale and Ringrose on board with expansive Irish game plan
Real news has value SUBSCRIBE