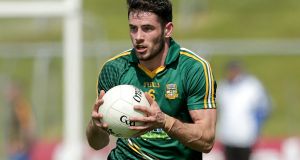 Meath captain Donal Keogan led his side to victory over Laois in Navan. Photograph: Morgan Treacy/Inpho

Meath set up an early season clash with neighbours Louth after a late scoring burst secured an O’Byrne Cup semi-final spot at Páirc Tailteann on Sunday.

The Royals pipped UCD on score difference after substitute Mickey Newman drove a 13-metre free through a crowded goalmouth and low to the Laois net a minute from the end of added time.

And just to make certain of a last-four spot captain Donal Keogan drove forward from defence to shoot a point before Newman’s quick free set up Graham Reilly for a second Meath goal in added time.

It proved a hectic ending to a game that was closely contested for the most part.

With Donie Kingston in fine shooting form Laois led 0-9 to 0-7 at the break. Meath though started the second half brightly with five successive points in a 10 minute spell to forge ahead by three.

Laois responded and Kingston pointed from play to level the sides at 0-12 each entering the final quarter. The outstanding Graham Reilly restored the lead for the hosts and Seán Tobin then added two more points.

Two further points from Kingston took his tally to eight and left the minimum between the teams with two minutes of normal time remaining.

Then came that late surge and a flattering eight point victory for the home side.

Louth gave the students of DIT a hard lesson to book a semi-final derby date with neighbours Meath.

Despite boasting a strong line-up, DIT proved no match for the home side, who let loose in the second period to pip Kildare for a last-four spot.

Playing into a stiff breeze Colin Kelly’s men made a bright start and a well-worked goal, slapped to the net by Jim McEneaney, saw them open a 1-3 to 0-1 lead.

DIT eventually settled into the game and kicked six points without reply from corner forwards Conor Madden and Killian O’Gara to stick their noses in front by 0-7 to 1-3.

However, Louth finished the half as they started it, and a second goal from Barry Flanagan made it 2-5 to 0-7 at the interval.

With the breeze at their backs after the break, Louth were a more potent force, and it was one-way traffic from the off.

They racked up 1-10 before DIT managed to hit the target, the second goal expertly dispatched by midfielder Tommy Durnin.

Emmet Ó Connaighle bagged a consolation goal for DIT, but all Louth eyes were on the Offaly and Kildare game at that stage and Kelly will welcome another competitive outing next Sunday.

Wexford’s extra class showed as they cruised to a comfortable 14-point victory over ITCarlow at Bunclody.

For all but a few brief second-half minutes Wexford were in total control. They had started impressively, racing into 0-5 to no score lead inside nine minute through points from Colm Kehoe, Kevin Rowe, Tiernan Rossiter, Donal Shanley and Kevin O’Grady.

Barry McHugh tenth-minute point opened the IT Carlow account, the same player adding two quick-fire points from frees, but with Shanley, Rossiter and O’Grady shining in the home attack they went on to build a 0-12 to 0-6 interval lead.

Wexford maintained their dominance through the second half and were leading 0-19 to 0-11, when Kevin Rowe lobbed a superb 65th-minute goal.

ITCarlow put in a spell of attacking football resulting in a Chris Healy goal, but it was the home side who finished with goals from substitutes Paul Curtis and Seán Ryan to run out the most comfortable of winners, ending their group campaign on three points with IT Carlow remaining pointless.

Unbeatable, unbackable, a hero: What’s next for the great Faugheen? 07:30
Michael Walker: Watford’s survival could be in good hands with Pearson at the helm 07:00
Irish squad in the dark as clouds hang over Six Nations 06:00
Weekend hurling previews 06:00
Three Munster Academy players selected for Pro14 clash with Scarlets 06:00
Crossword Get access to over 6,000 interactive crosswords