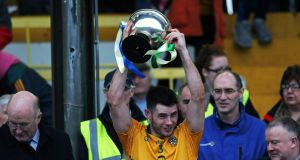 Having finished their Leinster championship last summer with that morale draining defeat by Westmeath, Meath footballers bounced back to claim the province’s secondary tournament the Bord na Móna O’Byrne Cup for the first time in 10 years.

Before around 5,000 people in Navan, the home side comfortably saw off the challenge of Longford, surprise conquerors of All-Ireland champions Dublin a week previously.

It had something of Meath’s semi-final about it in that just as they had allowed Louth back into the match in Drogheda they similarly facilitated a brief Longford recovery just before half-time. But not for long and three rapid-fire points – including one of the half dozen that earned Graham Reilly the man of the match citation – in the minutes before the interval cancelled out the goal conceded on 28 minutes.

This pattern repeated itself throughout the first half and at times it looked like a conditioned game designed to see how long a team could keep the ball without attempting to score.

By contrast Meath’s first score came from a route one delivery from Darragh Smyth to Michael Newman, who was fouled and kicked the free.

Longford manager Denis Connerton made the point afterwards that he felt his team’s heroics against Dublin had left them a bit drained.

“We’re disappointed. At times we looked very poor today. We looked jaded tired, looked exhausted. I don’t think we’re that bad. Maybe we weren’t as good as what we looked last week either – lies somewhere in between the two performances. Definitely we looked exhausted.

“In fairness Meath were good. I thought they were outstanding, Graham Reilly in particular. We tried so many different options but he just grew and grew into the game and his pace was electric. You can see why he is such a big player for them. He was very influential. He won frees – just difficult to say with him.”

Reilly’s speed and instinct for space was the biggest thorn in Longford’s side but Meath’s work-rate was excellent up and down the pitch. Led convincingly by Donal Keogan they marked well when Longford attacked even if the slow build-up was an assistance but the forwards also tracked back tirelessly – Smyth is particular, who within two minutes around the hour mark had a shot blocked in the Longford square before taking a Robbie Smyth attempt off his own goal-line.

Not everything Meath tried paid off – Andrew Tormey threaded a couple of lovely passes through the Longford defence but neither Newman nor Donal Lenihan were able to capitalise – and they wasted other chances but overall the team effort had a decent urgency.

Longford were four off the lead at the break, 1-3 to 0-10, and although they didn’t give up and both Smyth and McGee kept probing for scores the match ran irretrievably away from them in the 45th minute when Newman bustled in from the right – attracting some suspicion of over-carrying – and created space for Cillian O’Sullivan who slid the ball into the net with a stiletto thrust as far as the contest was concerned.

Since returning from long-term injury O’Sullivan has been a busy presence for Meath in recent weeks and his manager paid tribute.

“I have said it as a statement of fact rather than an excuse over the last couple of years,” said O’Dowd, “that Meath have been hit hard by a couple of key men who have picked up injuries. The likes of Conor Gillespie and Kevin Reilly – and Cillian. He’s back after two years. He’s in brilliant shape, he’s a real leader, he has a real hunger to play for the county and lead from the front.

“He’s had two years out of the game. Two years exactly since the Galway league match. He hadn’t played since. That’s all down to his work on his own. He’s a great addition to the group.”

Both teams now focus on their opening league fixtures next weekend. O’Dowd received the bittersweet news that both of Meath’s representatives in the All-Ireland junior and intermediate club semi-finals had bitten the dust and he will have an improved hand for the visit of Armagh.

Connerton readies himself for the trip to play the county’s apparently constant companions, Offaly, who they met three times last season in league and championship. He was wary about the perils of all the recent exposure.

“Offaly will be sitting out there waiting for us, they’ll be fresh, have their homework done on us. We have been distracted by these games. They are great to get them and it’s a great competition but there are a lot of games in it. Five games in three weeks in heavy conditions

“We’ve used 26 players which is as much as we have at the moment. A lot of counties in Leinster, therefore a lot of games. You are victims of that in the province that you are in.”

1 Tour de France: Every yellow jersey winner must feel guilty by some association
2 Kevin Babington: Learning to live again after life changed forever on Long Island
3 Bielsa delighted with improved defence as Leeds move for Cantwell
4 Sam Bennett: ‘A green jersey in the Tour de France is such a highlight of my career’
5 Juan Imhoff and Racing 92 leave it late to end Saracens’ reign
Real news has value SUBSCRIBE

Celtic keep up the pace with comfortable win over Hibs 17:40
Dicksboro pour out all their subs but can’t stop Ballyhale tsunami 17:35
Here is your handy guide to sport on television this week 17:01
More VAR handball drama as Newcastle snatch point at Spurs 16:43
Bielsa delighted with improved defence as Leeds move for Cantwell 16:20
Crossword Get access to over 6,000 interactive crosswords