Life, coaching and the philosophy of football 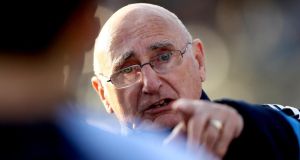 Mickey Whelan: “You realise there’s a time to stop and then some people just get into coaching because they have something to offer”. Photograph: James Crombie/Inpho

Fifty years ago this Sunday, Dublin were also in action against the Connacht champions. The narrow All-Ireland final win over a Galway side that would go on to win the following three titles featured the first appearance on the big stage of someone who would leave an indelible mark on Dublin football and the national coaching scene.

Mickey Whelan was Dublin’s top scorer in the 1-9 to 0-10 victory and won a place in the first All Stars selection, chosen at the end of 1963. According to this newspaper’s report, he was man of the match.

“Of course,” he says when asked does he remember the day well. “I might be getting on but I’m not senile! Occasions like that stay in the memory.

Same preparation
“Speed and strength and conditioning work have brought the modern game to a higher level but great players from any era would be as good in other eras once they were doing the same preparation work as everyone else.

“The big tactical difference is that 50 years ago, two guys – the midfielders – were expected to cover a third of the field. Now all players have come to terms with covering space.

“Coaching is about more than tactics. Eamonn O’Sullivan (the Kerry trainer who took the county to eight All-Irelands and wrote a seminal coaching manual The Art and Science of Gaelic Football had a grasp of how to get a team right for the big day.”

A life-long dedication to sport and coaching ironically took him out of circulation when his friend Kevin Heffernan was revolutionising Dublin’s prospects in the 1970s.

Whelan spent a number of years in the US pursuing degrees in Westchester College and Davis and Elkins College in West Virginia and playing soccer with the Connecticut Wildcats, where he made All-American, before returning to Ireland and joining Heffernan at St Vincent’s to lead the club as player-manager to an All-Ireland club title in 1976.

The trajectory of his coaching career took in work with universities, soccer clubs and discordantly, the Dublin senior team, which he took over after the management had brought All-Ireland success in 1995 called it a day immediately.

The two years were unhappy for Whelan, as his methods made little headway with a seasoned playing group.

A decade later the scale of his vindication was enormous.

Persuaded by Heffernan to take charge of the Vincent’s footballers, Whelan put them back on track and they travelled all the way to All-Ireland success in 2008 – an achievement he identifies as the most enjoyable of his career.

The full forward on that team was a veteran Pat Gilroy, who was appointed Dublin manager only months later and suddenly, Whelan’s inter-county coaching career was revived.

Two years ago, All-Ireland success crowned the come back. Two of the major talking points of the championship win were the greater defensive emphasis and the big turnaround in fortunes against Kerry, who had beaten Dublin by 17 points in 2009.

“I don’t accept that,” he says about the characterisation of defensiveness.

“We were an attacking team as well. Kevin Nolan got man of the match in the final and kicked a great point.

“James McCarthy got very important goals for us. I believe what happened was an evolution. After the hiding we got from Kerry we had to re-balance the way we played.

“I can tell you that the philosophy then was – as it is now – that when we don’t have the ball we all defend.

“But – and Jim Gavin has said this several times – there is a Dublin way of playing which goes back to the 1950s.

“Confidence is important. David Hickey (former 1970s footballer, team doctor and selector with both Gilroy and now Gavin) has it. He’d have got on any team in any era because he has this indelible self-belief and that was a huge impact on 2011.

“He was the only one involved who’d actually been on winning teams against Kerry in the championship.”

In the same year he completed a PhD in DCU but stepped down from his role with Dublin, as his wife Irene, who passed away last March, was unwell.

He reflects that coaching was so much more than a substitute for playing.

“There’s no doubt about it. When you mature you realise there’s a time to stop and then some people just get into coaching because they have something to offer.

“I studied PE. Physical education and biology was my life and an extension of that was working with university teams and club teams and county teams.

“When my children were nine, 10 and 11 my wife was really accommodating and none of it could have happened otherwise. It happened for me at the right time with the right people around me.”