Honours even at Celtic Park 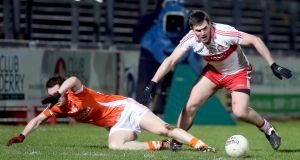 Derry and Armagh could not be separated in a free scoring shootout at Celtic Park in a game that saw many momentum shifts over the 70 minutes.

With the home defence looking very porous in the opening minutes, Armagh started brightly as Gavin McParland, Jamie Clarke and Kevin Dyas kicked early points. And the visitors could have been even further ahead but Ciaran McKeever was denied by Derry keeper Thomas Mallon in a one-on-one after five minutes.

McParland took advantage of over-elaboration in the heart of the Derry defence to kick Armagh’s fourth point before Charlie Kielt raised the white flag on 17 minutes to get the Oak Leafers off the mark.

Having found their range Derry kicked three more points in as many minutes as Emmett McGuckin, Lee Kennedy and James Kielt were on target to level matters at 0-4 apiece after 25 minutes

Armagh edged back in front from Aaron Kernan ’s 27th minute free but James Kielt pointed three times twice from frees and once from play to see Derry lead by 0-7 to 0-5 on 32 minutes before Johnny Hanratty ’s injury time effort for Armagh closed the margin to a point at half-time.

As with the first half, Armagh sped out of the blocks and three scores from Stefan Forker, Aaron Kernan (free) and Stephen Harold saw Armagh lead 0-9 to 0-7. James Kielt kicked a super point to pull one back but Kernan and Forker added frees and Declan McKenna pointed to make it 0-12 to 0-8.

Lee Kennedy from a narrow angle and two James Kielt frees got Derry back within a point with 55 minutes played but the game looked to be going Armagh’s way when sub Anto Duffy and Gavin McParland scored to make it 0-14 to 0-11 with an hour gone. Indeed they might have sealed the match had Derry keeper Mallon not recovered to make a one-on-one save from McParland following a poor kick out.

Derry had one late chance to win the match with a free from the left flank in injury time but Mark Lynch’s effort drifted just wide as the teams could not be separated.