18 awarded to players from losing team, with just six going to those on winning side 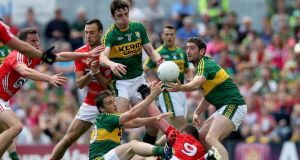 Cork’s dominant second-half showing in last Sunday’s Munster SFC final was largely down to the dismissal of Kerry’s David Moran – but what effect has the black card had on the championship as a whole so far?

Last year’s All Star midfielder became only the second man to receive a black card in a senior inter-county provincial final when he made way in 42nd minute following an adjudged third-man tackle.

In his absence, the All-Ireland champions won just one of the remaining eight contested kickouts, with his opponent on the day Alan O’Connor ultimately receiving the man of the match gong.

In this year’s championship, there have already been 34 black cards in 39 games. Giving an average of 0.87 cards per game, up on 0.80 per game recorded in last summer’s 64 contests.

In the provincial championships so far, 18 black cards have been awarded to players from the eventual losing team, with just six going to players on the winning side (three were dished out in Sunday’s draw).

Much like Kerry last weekend, other teams have already suffered from the loss of integral players to black cards. Meath’s Graham Reilly was wrongly dismissed for a perceived trip in their loss to Westmeath with his team seven points ahead after 46 minutes, with four points already in his personal account. 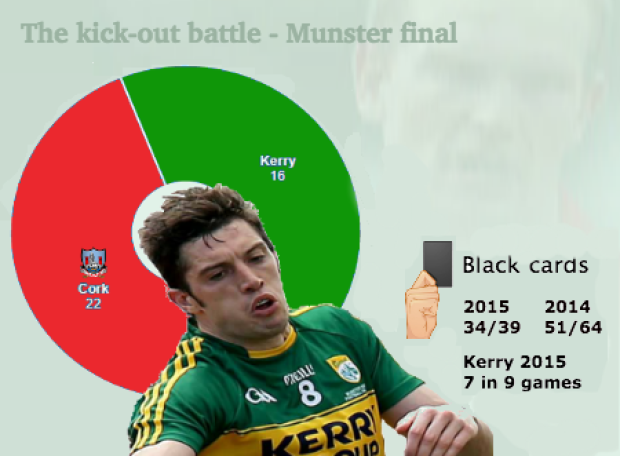 In Reilly’s absence, Meath would score only four more times, two of which came within two minutes of his departure, spurning a further five of seven scoring chances.

Moran’s leadership was similarly missed for Kerry, particularly in the midfield battle, which had up to then been very keenly contested.

Kerry had won seven of the 17 contested kickouts and throw-ins in a game dominated by short kickouts and the pursuit of the breaking ball. Kerry hit 10 short kickouts to Cork’s seven, with Moran and Cork’s Fintan Goold each catching two clean balls, and O’Connor, Bryan Sheehan, Mark Collins and Kevin O’Driscoll all fielding one kickout cleanly each.

Yet despite his two clean catches, it was Moran’s outlet ball, his physicality, mobility and leadership between the two 45s which Kerry missed most.

In his 42 minutes, Moran contested eight balls between kickouts and throw-ins, made four kickpasses, six handpasses, kicked a wide from play and completed three take-ons.

Alan O’Connor’s impact in statistics perhaps wasn’t quite as prominent – he caught one ball, he was fouled once, won a 45, made two kickpasses, five handpasses, had one take-on and contested 12 balls between kickouts and throw-ins.

Yet it was the returning midfielder’s physical presence and leadership which spurred on his Cork team-mates – with his two second-half turnovers really setting the tempo.

Moran’s black card was the fifth in this year’s Munster championship and it was Kerry’s first in their two championship games, having received the second highest number of black cards during the league.

They picked up six in their seven league games, one less than Down, with 105 black cards in all being dished out throughout the entire league. That’s a rise of almost 15 per cent from last season’s total.

So with black cards on the up and teams clearly at a loss when short their key men, no doubt managers will be looking to keep cynical fouling to a minimum.