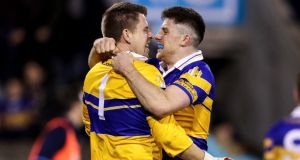 The contribution of Des Carlos proved pivotal by the final whistle with his nine points over the hour a key contribution in a contest of high energy but scant attacking initiative.

St Jude’s had previously lost at the semi-final stage in three of the past four years and their hugely disappointing record continued in a match that they showed little of the impressive form when defeating Kilmacud Crokes a week previously.

The perceived wisdom in advance of the tie was that Castleknock would require a positive opening to have any chance of causing an upset, given their opponents’ ability to defend from deep with heavy numbers.

However, the semi-final debutants improved with every minute and were dominant by the final whistle, completing a hugely deserved and historic success.

While enjoying a fair share of possession, they still fell behind in the fourth minute as Declan Donnelly eluded his marker to point from 20 metres.

Kevin McManamon should have landed a significant blow soon after as Jude’s forced a turnover close to goal but the ball slipped from his grasp with the Castleknock goal in his sights.

From the early stages it was evident that Jude’s were far more comfortable in releasing quick ball into their inside-forward line with their opponents playing a running game that yielded a score through Carlos’s free in the sixth minute.

Given their experience at this stage of the championship, it was understandable that St Jude’s would settle the quicker and they regained their advantage three minutes later thanks to Kieran Doherty’s ambitious effort.

St Jude’s soon doubled their lead thanks to an excellent point by Niall Coakley as their initially more expansive approach looked to be paying early dividends.

However, far from building on this solid platform, they retreated increasingly further towards their own goal, inviting their opponents to enjoy plenty of possession and increase their confidence as a consequence.

While not able to puncture the heavily-manned Jude’s defence initially, Castleknock were patient enough to force a free close to goal that saw Carlos add a second point in the 13th minute.

From that point, it proved terribly disappointing fare with Castleknock dominating the ball but with scant return and a depressingly familiar stalemate ensued.

There was one bright spot in the remainder of the half as Mikey Galvin fired over a sublime levelling score in the 20th minute, the final score of the half as Jude’s were held scoreless for a full 22 minutes.

With the sides deadlocked at 0-3 apiece at the break, St Jude’s looked to address their attacking issues with Enda Dalton’s introduction at the break yielding an early free for Coakley.

Castleknock’s response was admirable with Carlos converting two frees in quick succession and another free in the 41st minute increased their lead to two points, a relative chasm in such a low-scoring contest.

With St Jude’s looking bereft of inspiration in attack, they received the required boost at the end of the third quarter through a reliable source when McManamon eluded the clutches of Tom Quinn for once with his precise finish beyond Morven Connolly the almost inevitable result.

However, it was the energy and athleticism of Castleknock that proved telling in the final quarter and after Ben Galvin restored parity in the 48th minute, Carlos seized the initiative with his precise free-taking augmented by two superb points from acute angles, scores that will live long on Castleknock folklore as they advance to a final meeting against St Vincent’s on Saturday week.