Derry just miss out on draw at Páirc Uí Rinn 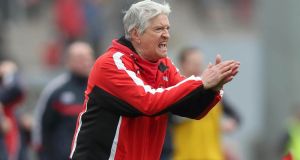 
Cork just about preserved their 100 per cent record and inflicted a first league defeat of the season on newly promoted Derry in a pulsating tie at Páirc Uí Rinn yesterday.

At one stage in a mostly Cork dominated first-half the home side enjoyed an 11-point lead and appeared to be coasting until Derry fought back and nearly forced an injury-time equaliser.

Outstanding midfielder Fergal Doherty, who helped the visitors gain a stranglehold in the centre during the second-half, shot from distance in the closing act in stoppage time, but his effort drifted right and wide.

A couple of quick-fire goals before half-time had brought Brian McIver’s Derry side right back into contention.

A minute from the interval an intricate move led to Enda Lynn claiming the first after Ken O’Halloran stopped the initial shot only for the rebound to strike the Derry player and end up in the net.

And then in the third minute of injury-time Derry prised open the home defence a second time, when James Kielt, towering over Cork corner-back Alan Cronin, set-up Emmett McGuckin for a cracking finish.

It left Cork 2-9 to 2-4 in front at the break, a five-point lead paying little dividend for their first-half superiority, which began with Paul Kerrigan’s opening point inside 25 seconds.

Cork monopolised possession around the middle and the almost constant service into their devastating full-forward line was invariably used by their lethal finishers.

It was 0-5 to 0-0 after 12 minutes, when Cork pounced for their opening goal. John Hayes floated an inviting ball towards the edge of the square, where the in-rushing John O’Rourke flicked it past goalkeeper Thomas Mallon.

Another blow
Gradually Derry began to settle and started to read the breaks better, but it took defenders Mark Craig and Sean Leo McGoldrick to show the attack how to finish as the visitors at last got on the scoreboard.

But, they suffered another blow in the 22nd minute with a superb second Cork goal, scored by corner-back Tom Clancy, who soloed through after Kerrigan and Hayes pounced on a loose ball in the Derry half-back line and flashed an unstoppable shot high into the net.

Derry, who took an age to emerge for the second-half, declared their intentions with a Lynn point inside 15 seconds and this set the tone for an exciting 35 minutes.

The initiative was still with Cork, who led by 2-12 to 2-6, when O’Rourke was shown a black card following a foul on Lynn in the 40th minute and Derry knocked over three points without response, including a super Ciarán McFaul effort.

Cork responded in the manner of a side brimful with confidence, notching three points of their own. The loudest roar of the afternoon was reserved for substitute Colm O’Neill, who pointed with his first touch after 46 minutes. Barry O’Driscoll kicked another for 2-15 to 2-9 moments later.

A Doherty point then cut the deficit to the minimum as Cork struggled to get the ball beyond halfway and it was tit-for-tat in a tense closing quarter.

Mark Collins soothed home nerves somewhat only for substitute Benny Heron to land a 45 before O’Neill and Lynch exchanged frees, 2-17 to 3-13, with seven minutes remaining and Cork hanging on.

O’Neill nudged Cork two in front with a free on the call of 70 minutes only for Chris McKaigue to respond immediately before Doherty’s late effort just missed the target.