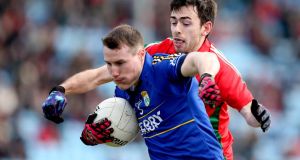 A slow start by two of the regular contenders for major honours was settled by a decisive push for home by Mayo.

In watching their team fashion its first league win of the year, the Mayo fans also welcomed back two of the most conspicuous stars of last summer’s All-Ireland run, Séamus O’Shea and Donal Vaughan.

Coincidence or not, the Kerry men did not score after the pair came in to bolster the Mayo ranks and as the Kingdom’s challenge petered out, the visiting fans found themselves leaving Castlebar discussing the ramifications of relegation for the second spring in succession.

“Disappointing. It is what it is,” said Kerry manager Eamon Fitzmaurice afterwards. The Finuge man did not panic last year when he found himself in Castlebar when Kerry were also winless halfway through the league and he won’t panic now. But these have been a sombre few weeks for Kerry football.

“We struggled to score in the second half again. It is becoming a pattern and a worrying pattern. We had one or two chances in the last ten minutes that, if you are going to win tight games like that, you need to convert. Look, we are staring down the barrel of a gun again and we are in a situation where we are nought from three. And we need to get points on the board.”

That was Mayo’s objective here also. “It was about getting two points today . . . I didn’t care how we did it in some ways,” said James Horan at full time.

As it turned out, they did it through the reliable engine of their half-back line. Lee Keegan and Colm Boyle were excellent for Mayo yesterday and with Keith Higgins drafted from attack to corner back, their defensive unit had a forward thrust all afternoon.

Reliably productive
Alan Freeman did about everything a big, ball-winning forward can, shooting a well-taken goal after just 30 seconds, landing an important point to put Mayo 2-11 to 1-13 clear and acting as relief free-taker when goalkeeper Rob Hennelly decided that four misses from four was enough.

Throw in a reliably productive afternoon from Kevin McLoughlin and a quietly authoritative shift at midfield from Aidan O’Shea and you were left with the sense that the defeated All-Ireland finalists are warming nicely to the season.

“We were poor in some ways...in the first half, Kerry were getting scores far too easily,” Horan pointed out.

“Every time it looked like we were getting momentum, we let them back in. But we finished very strongly which was very encouraging.”

The quality of the Kerry scoring was the distinguishing feature of the first half, with James O’Donoghue clipping a glorious early point and David Moran, who had a terrific first half, combining with Donnchadh Walsh and Conor Cox and kicking a fine point.

But the ease with which the Kerry attackers played short passes through the Mayo defence was surprising, as was the space given to marksmen like Barry John Keane and Kenmare’s Stephen O’Brien.

Daithi Casey, in as captain after Dr Croke’s traumatic exit from the All-Ireland club championship, might have had Kerry’s first goal, when he was left isolated one-on-one with Shane McHale and made the most of the space, throwing a good feint before crashing a shot off the crossbar. As it was, Kerry had to wait until the 38th minute for their goal but it was was a gem. O’Brien took a perfect crossfield pass from Peter Crowley, took Ger Cafferkey on and let fly from 25 yards, his shot curling high around Hennelly.

That left Kerry two points clear – 1-12 to 2-7 – and cancelled out Jason Doherty’s goal on the stroke of half time. But they managed just one more point – also by O’Brien – for the remainder of the match.

Kerry’s slow loss of influence on the game was disheartening for the visiting support but the sight of Marc Ó Sé leaving the field with 14 minutes remaining and the fact that Darran O’Sullivan was held in reserve offered the reassurance that they are nowhere near their high summer pomp.

Still, the succession of snatched chances and misses and the anxiety which crept into their play was a reminder of just how much experience this Kerry squad has lost. Tyrone will pay a visit to Killarney next weekend.

James Horan offered a quizzical smile when he was invited to sympathise with Kerry’s plight.