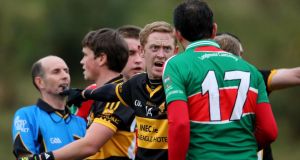 The margin of victory masks the story of this fractious and at times ill-tempered semi-final at Lewis Rd, Killarney on Saturday which produced 17 cards – 14 yellow and three red.

In the end Crokes produced an explosive final 20 minutes to put the Tipperary dual champions to the sword by 17 points.

Loughmore-Castleiney began in whirlwind fashion in front of an attendance of 1,142, kicking two early points (one a free) from John McGrath. McGrath also missed two scoreable frees, and Cian Hennessy had a goal-bound shot taken off the line by Crokes defender Luke Quinn as the outsiders began with purpose.

Set up
Then Crokes carved open the Tipp side’s defence as Kieran O’Leary, Alan O’Sullivan and Jamie Doolan combined to set up Brian Looney who was fouled. Colm Cooper drilled the penalty low to the net.

Points followed from O’Leary, O’Sullivan, Doolan and Looney and suddenly a rout looked on. But a John McGrath goal from the penalty spot in the 23rd minute gave the Tipp champions some hope as Crokes led 1-8 to 1-3 at the interval.

Early second-half points from John McGrath and Ciaran McGrath closed the gap further but Loughmore received a big blow when Hennessy was sent off.

Colm Cooper arrived on the 40 and the game was over as a contest in a three-minute spell when he set up Brian Looney and Kieran O’Leary for tow quick goals.

Crokes joint manager Noel O’Leary said: “Today was an awkward day. We expected a tough game . . . but we got over it and 3-16 is good kicking and we’ll move onto the final.