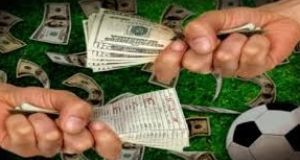 “Betting on schools matches or juvenile matches in general is something we are categorically against,” said the GAA’s head of health and community, Colin Regan.

The GAA has made a submission to the Department of Justice and Equality with a view to outlawing gambling on schools matches and other games involving juveniles.

With the Gambling Control Bill 2013 currently working its way through the Oireachtas, the association wants to pressure the Dáil into taking a stand against the practice of offering odds on underage competitions across all sports.

“It is the opinion of the GAA’s community and health section that an anomaly exists in existing Irish law in relation to juveniles and gambling,” wrote the association in its submission late last year. “Particularly in relation to betting on juvenile sporting events, including those carried out under the aegis of the GAA.

“Under existing gambling legislation minors are not allowed to even enter a licensed gambling establishment yet bets of a variety of nature may be placed on sporting events (including Gaelic games) involving minor players. This unfairly exposes our young players to the pervasive influences of gambling at a young age and could even leave them susceptible to pressures associated with problem gambling.

Colin Regan, head of community and health in Croke Park, made the submission on behalf of the GAA and hopes to see progress made later in the year, if and when a new government turns its attention to the Gambling Control Bill.

“Betting on schools matches or juvenile matches in general is something we are categorically against,” said Regan. “We think it sets out the wrong message, we think it puts undue pressure on juvenile players both in terms of the potential influence of older outsiders who might have access to them . . .

“It’s reprehensible that at a time in their lives when these players are prohibited from setting foot inside a betting shop, they can potentially become fodder for punters and bookies.

“I played intercounty for over a decade and occasionally had to put up with taking phonecalls from fellas looking for information because they were going to bet on an upcoming game. Imagine being a 17-year-old schoolboy and having to deal with that?”

The Irish Times contacted Paddy Power and Boylesports for a reaction to the GAA’s concern, on the basis that they’re the two bookmakers offering odds on a Leinster colleges football match this weekend.

“There is a demand, that’s why we have it priced. More often than not, demand for those matches comes on the request of our consumers. ‘Are you betting on that event?’ As I said, we are working in a very competitive marketplace. Should the customer wish an event to be priced up, it’s our duty to price it up to try and keep hold of that custom.”

Paddy Power’s PR department issued a statement. “Paddy Power offers a wide range of markets across a myriad of sports events around the world. The determination of these markets is influenced by the potential demand from customers who are legally sanctioned to make a bet.

“In this context, Paddy Power offers markets in minor (Under 18) sports events across a range of sports and adult customers wager on these markets. It is illegal in Ireland for under 18s to place a bet. We are very committed to upholding the law and have multiple measures in place to prevent under 18s from opening an account and placing bets . . .

“Paddy Power adheres to the law in every jurisdiction in which we operate. If there are changes in legislation, Paddy Power will continue to adhere to the law of the land. It is entirely the prerogative of the GAA, or any other organisation, to make submissions to Government on issues it considers important.”