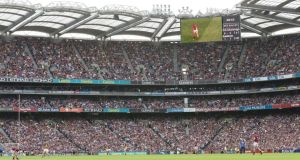 RTÉ will no longer have exclusive broadcasting rights to the All-Ireland hurling and football finals at Croke Park as Sky are also believed to have also acquired non-exclusive rights. Photograph: Inpho

The GAA are expected to announce shortly – maybe as early as next week – details of the latest three-year broadcasting rights agreement. It is expected to be commercially successful, with the inclusion for the first time of exclusive championship coverage for a subscription channel, Sky Sports, but there may well be another major sales job required to sell the idea to a public that has been accustomed to viewing summer matches on free-to-air.

Whereas RTÉ will hold on roughly to their share of matches – under the expiring deal, 31 out of 40 – the losers are expected to be TV3, the terrestrial channel, which for the first time broke RTÉ’s monopoly on championship matches in the agreement of six years ago.

Six packages
Although the total offer of matches, spread across six packages, has gone up from 40 to 45, Sky’s share, believed to be packages five and six, amounts to 14.

RTÉ’s packages are expected to include the bulk of the fixtures and retain the premium matches, such as All-Ireland semi-finals and finals. They will, however, no longer be exclusive, as Sky are also believed to have also acquired non-exclusive rights to show them.

The anticipated move represents a paradigm shift for the GAA and is likely to cause unhappiness amongst the membership and also the viewing public, who will have to pay to watch matches for the first time during the summer.

Ten years ago the association first went down the route of striking an agreement with subscription channels when selling the rights to Saturday night floodlit league matches to Setanta Sports.

The impact of this was softened by the fact that live league fixtures had only just begun to be broadcast and so for the preponderance of the period during which those they have been shown, there has been an established subscription element.

It was also pointed out that Setanta were an Irish company which had worked with the GAA for nearly 10 years previously as the international rights holder. Yet, despite high hopes, the company was never awarded exclusive championship rights.

Granting exclusive packages to the multi-national Sky corporation to show fixtures up to and including All-Ireland quarter-finals while dropping an Irish terrestrial channel may prove unpopular.

Against that, industry sources point out there is likely to be curiosity amongst the Gaelic games viewership to see what innovations Sky can bring to football and hurling coverage.

From the company’s point of view, the new venture – in the last decade it did show a weekly highlights package of championship action – comes at a time when it is under pressure from BT in respect of both Premiership soccer and European Cup rugby rights.

Ireland is one of Sky’s biggest growth areas and with BT expected to concentrate on English rugby clubs in whatever deal they strike with their rival in respect of the new European rugby competition, Sky will have an attractive package for the rugby viewer, as they are also replacing RTÉ as TG4’s partners in showing Celtic League matches.

Having access to GAA championship fixtures will help to combat seasonal churn in their subscription numbers – which generally occurs during the summer when soccer and rugby followers drop out until their seasons re-commence. There will also be Gaelic games followers who already subscribe to the channels.

Up for grabs
Sky will also be able to show matches from their packages in Britain, although overseas rights to other packages appear to be up for grabs.

Although the GAA have long pined for real competition in the television rights market, it was always felt they would consider themselves restricted in the type of deals they could realistically strike.

As recently as last year, association director general Páraic Duffy in Michael Moynihan’s GAAconomics: The Secret Life of Money in the GAA , told the author:

“With our TV rights we’re constrained, rightly, because we wouldn’t get away with selling the rights to the championship to Sky Sports or somebody like that, even though those organisations have expressed an interest.”

“We have an open agenda on this one. What we’re charged with, is to get the best deal for the Association. That’s not necessarily the most money but it’s certainly where we’ll get the best TV coverage, exposure and marketing and push for our games and benefit long-term.

Given the task of conducting the broadcast renegotiations, McKenna has taken his cue to maximise revenue and within the industry there has been acknowledgement that he pitched the packages inventively, including something of value in them all with a view to enhancing revenue.

He may, however, be about to find out that although the GAA return 80 per cent of their revenues to constituent units in the form of grants, there will be those within the membership – to say nothing of those without – who feel the association can make too much money.