Fertility treatments: a starter guide to IVF, IUI and ICSI

The terms IVF and IUI are well known but what’s involved is less clear. Declan Keane of ReproMed explains the main fertility treatments 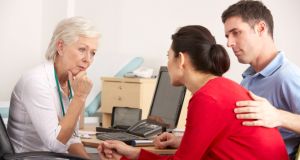 There are a number of ways medical science can give Mother Nature a little boost when it comes to getting pregnant.

One of the first options to consider for couples finding it difficult to conceive is Intrauterine Insemination (IUI). With this method, your fertility clinic tracks the woman’s menstrual cycle and uses ultrasound scans to monitor the growth of follicles. These are located in the ovaries and are what go on to become eggs.

The clinic then prepares her partner’s sperm sample, using the best quality sperm, and inserts it directly into the womb.

In this way the sperm bypasses any physical barriers in the female reproductive tract and can carry on with its journey to the egg at the best possible time for ovulation. “Instead of having the sperm make a journey from A – Z, IUI is about allowing it to start at Q,” explains Declan Keane, founder of ReproMed, a nationwide chain of fertility clinics.

Two or three initial visits to the clinic are required to establish the best time for the IUI to take place, and both parties will need to attend the clinic on the day of the procedure. A pregnancy test is then taken two weeks later.

“A woman’s chance of getting pregnant is normally around 18 per cent. With IUI it’s 20 per cent, which might not seem like a great improvement, but if you are at 0 per cent then it really is,” said Mr Keane.

IUI can also be used in cases where donor sperm is required, where the male partner’s sperm has become infertile due to trauma, genetic abnormalities or for unexplained reasons. It is also used by single women and same sex couples who want to start a family.

For some, In Vitro Fertilisation (IVF), will be the assisted reproduction technology most likely to be of benefit. This can include cases where, perhaps, fallopian tubes are blocked or absent.

Each month, a woman’s ovaries activate hundreds of eggs, but without medication to stimulate this process, only one egg will mature – which means the chances of getting pregnant are lower.  Patients who are undergoing IVF receive medications to boost the number of mature eggs.

When a patient starts the treatment they are monitored with ultrasound scans to measure the development and size of follicles on their ovaries. Ideally, each follicle would contain an egg.

Ovarian stimulation lasts on average between eight and 12 days, though in some cases can take longer.

Egg retrieval is carried out under light sedation as an outpatient. It does not require surgery, hospital admission, stitches, or general anaesthetic.

During the procedure, an ultrasound probe is used to visualise the ovaries and a needle attached to the probe is passed through the vaginal wall to the follicles. The fluid in each follicle is examined for the presence of an egg. Eggs are retrieved, washed, transferred to a special culture medium, and stored in an incubator.

While egg retrieval is taking place, the male partner produces a sperm sample, which is then examined in the laboratory. The most motile sperm are extracted and added to the dish or dishes containing the eggs. The dishes are then returned to the incubator, where they are cultured and monitored by embryologists.

The dishes are checked the day after egg retrieval and the embryologists will inform you of the number of eggs that were successfully fertilised. These are left undisturbed until what’s known as Day Three of the process, to assess the development and quality of the resulting embryos.

The embryologist will make a judgement based on his or her expertise and experience about whether to recommend embryo transfer on Day Three, or to allow the embryos continue to develop to Day Five.

Not all eggs that fertilise will develop into embryos, and equally, not all embryos will survive until the day of transfer.

Embryo transfer does not require anaesthetic and normally takes just ten to fifteen minutes. Embryos are placed directly into the womb by means of a catheter.

In cases of poor sperm quality, another technique, Intracytoplasmic Sperm Injection (ICSI), may be an option. It was developed to assist sperm which may otherwise not be able to fertilise an egg.

With IVF the sperm and egg are placed together in a dish, and fertilisation relies on natural selection of the sperm to fertilise the egg.

With ICSI however, a single sperm is injected directly into the centre of the egg using a microinjection needle. In this way the sperm are not required to penetrate any of the barriers surrounding the egg.

Prior to the injection procedure, the eggs are cleaned of their surrounding cells using an artificial enzyme similar to that naturally released by sperm. The egg can then be assessed for maturity which is clinically important for ICSI.

Once injected, the eggs are incubated for a period of at least sixteen hours, after which time they will be checked by the embryologist to see if fertilisation has occurred.

In each case the hardest part is having to wait up to two and a half weeks before taking a pregnancy test.

Indeed, while the steps involved in assisted reproduction techniques such as IUI, IVF and ICSI are easily outlined, nothing can prepare you for the emotional rollercoaster they involve. Anyone who has been through it will attest that it is one of the most difficult experiences of their life, and without any guarantee of success at the end of it.

It doesn’t help that accurate success rates are hard to establish, given that the statistics used by various practitioners can relate to different outcomes, from embryos or positive pregnancy test results, to heartbeat detection or live births.

Declan Keane’s advice to couples looking to embark on the fertility treatment route is not to get caught up in the numbers. “There is no standardised approach, which is why statistics can be frustrating,” he says.

ReproMed has specialist on-site counsellors to help support patients throughout. “It’s a long, rough journey. You can’t help but set yourself up so high which is why the fall is painful,” says Declan Keane. “Through information and education, as well as through our counsellors, we can help give people back a sense of control.”

And new techniques are being developed and improved all the time. “We’re really only at the embryonic stage of assisted reproductive technology,” he says.

As part of Vhi Healthcare's new fertility benefit, members on applicable plans can receive a contribution towards fertility treatment, including IVF, IUI and ICSI, with ReproMed. For more see www.vhi.ie/fertility