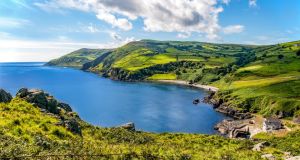 The Causeway Coast: the ocean acts differently here, where the Irish Sea and the Atlantic meet. The colours are more extreme, the tidal races more dramatic, the skies that bit bigger

Northern Ireland's Causeway Coastal Route offers a journey through a stunning landscape. Sheer cliffs, blue flag beaches, remarkable sea architecture and a thrilling history. It’s a wild and exciting place with so many reasons to visit, not least of which is as a world-class golfing location. Since Portstewart Golf Club’s much-lauded hosting of the Irish Open this year and with the excitement already building around The Open at Royal Portrush in 2019, Northern Ireland's Causeway Coastal Route has been recognised as being home to some of the best golf clubs in the world. It’s almost 70 years since the world’s oldest and most international golf tournament has been hosted in Northern Ireland and The Open will generate huge interest in the region.

The event will have a remarkable backdrop given its location and visitors there will experience a region that is packed with activities, excellent accommodation and great food and drink. Indeed, food and drink have become as much a part of the landscape of the Causeway Coast as the sights and sounds that it is famous for.

When Donegal man Donal Doherty decided to create a coastal offshoot of his multi-award winning Inishowen restaurant Harry’s, he chose the Causeway Coast as his location. Nestled in the sand dunes of Portstewart strand and wrapped in the wild winds coming off the north Atlantic, he and chef Derek Creagh created Harry’s Shack, the ultimate destination eaterie. Protected from the elements by their wood-burning stove, rustic tables and large windows they serve up a menu that is stuffed with atmosphere and the incredible flavour of this exciting part of Northern Ireland.

Food has found a great home on the Causeway Coastal Route and Harry’s Shack joins great food businesses like Made in Derry Food Tours, the Ramore Wine Bar in Portrush and the French Rooms in nearby Bushmills that are putting local ingredients firmly on the map. Bushmills alone is a fantastic calling card for the region. Already famous for the Old Bushmills distillery which gives you the perfect opportunity to explore the whiskey making process at the world’s oldest distillery, it is also a great place to base your trip. The Bushmills Inn at the centre of the town has grown from a small traditional coaching house built in the early days of the distillery in the 1600s into a four-star boutique hotel and restaurant today. It’s a beautiful hotel on the banks of the Bush River that has somehow managed to conjure 41 rooms and suites within its walls without losing any of the traditional feel that has always been its trademark.

The Gas Bar on the ground floor is a traditional Irish bar that is still lit by gaslight. Not surprisingly, given its location, it has a terrific whiskey menu and a seat by the fire here or in the restaurant offers an opportunity to taste the real effort put into sourcing local ingredients for its menus. Accommodation is equally well thought out with four-poster beds and incredible attention to detail that allows the traditional heart of the hotel flow into a very modern hotel experience. Bed and breakfast at The Bushmills Inn starts from £120 per room based on 2 people sharing, and with current exchange rates your euro goes further.

The neighbouring French Rooms on Bushmill’s main street continue this drive for excellence in food and drink in the town. While firmly rooted in the region’s local produce, the menu is inspired by the influence of the French Huguenots who settled and worked in the linen industry here in the 17th century. The flavours of Cajun French sea bass, spicy quinoa cassoulet and guinea fowl forestière bring a great twist to the food options here.

Bushmills is positioned well for a trip around the Causeway coast and the Giant’s Causeway itself. The 40,000 interlocking basalt rocks that form the Giant’s Causeway is only a short drive from Bushmills town. Long recognised as a premier tourist destination, the Giant’s Causeway plays a central role in revealing the drama of the coastline here. The product of a volcanic eruption 60 million years ago, it has come to represent something otherworldly for all who visit it. The basalt rock is a wild place and the coastline here is a haven for sea birds. You can expect to see fulmar, petrel, cormorant, shag, redshank guillemot and razorbill congregate along the waters edge and beyond as you explore the landscape. A World Heritage site, the Giant’s Causeway is Northern Ireland’s most visited attraction and sits next to one of Ireland’s most dramatic driving routes. However, it is also a great starting point to explore the Antrim coast on foot.

The Causeway Coast Way is a 51km walking route that offers an exciting way to see this part of Antrim. Taking in clifftops, beaches and hidden corners it reveals a landscape steeped in story and links Ballycastle and Portstewart across the majestic Antrim coast. A great way to experience it is in the capable hands of local guiding company Away a Wee Walk who lead groups and individuals on walks that reveal some of the best cliff tours in Europe. Tours also take in all of the best-known sights, such as the Carrick-a-Rede Rope Bridge that was built by salmon fishermen to connect the mainland with the small island of Carrick-a-Rede and the historic Dunluce castle. You can travel here by car or public transport too but following the Causeway Coastal Route is a great experience.

The view from Carrick-a-Rede is superb. The ocean acts differently here, where the Irish Sea and the Atlantic meet. The colours are more extreme, the tidal races more dramatic, the skies that bit bigger. And taking it all in from the middle of the Carrick-a-Rede Rope Bridge is a wonderful way to experience it. The waters that flow beneath create a great sea kayaking location that brings you into caves and inlets that just can’t be reached any other way. It’s magical and, if you allow it, the crashing waves will draw your eye out to sea and to Rathlin Island on the horizon.

With a population of just 150 people, Rathlin is a little known treasure on the Causeway coast. Lying between Northern Ireland and Scotland, it is famously wild and attractive. The best way to reach it is by ferry from Ballycastle. The journey is around 10km and brings you to an island that is bursting with stories. Among its many myths and tales it is said that it was on Rathlin that the Scottish king Robert the Bruce contemplated his future having been driven from Scotland in 1306. Observing a spider attempt to rethread a seemingly impossible web he was inspired by its perseverance and returned to Scotland to eventually reclaim his crown.

It’s great walking and cycling territory too and its shoreline is rich with sea and birdlife.

Look back towards the coast from here and you can start to recognise the drama that brings people here again and again and what inspires the more modern forces that shape the stories of the Causeway Coast. The TV show Game of Thrones was shot in the area and visitors can indulge their thirst for drama by visiting locations where this famous series was filmed. The most often sought out is the Dark Hedges, just 15 minutes drive from Ballycastle.

The row of beech trees that create the Dark Hedges were planted in the 18th century and even then were designed to impress. Their branches have grown and intertwined many times since and have become a natural part of the landscape of this region that is constantly reinventing itself.

The castles, the glens, the beaches and cliff tops are powerful testimony to a region rich in ambition. That ambition has translated into great food, fantastic accommodation and constant reinvention. The Causeway coast is a place that demands to be enjoyed.

The Causeway Coast is the most northerly part of Northern Ireland. It can be reached from Dublin in just under three hours and is only an hour’s drive from Belfast.

For planning purposes, it’s useful to think of the Causeway Coastal Route as stretching from Belfast in the east to Derry-Londonderry in the west. The town of Bushmills is a few minutes’ drive from the coast inland and is an extremely important part of the Causeway Coast experience.

Plan and book your autumn short break at discovernorthernireland.com