Let Down and Armagh unlock the natural beauty of Northern Ireland

Great food, accommodation and activities abound in the counties of Armagh and Down, and all just two hours' drive from Dublin 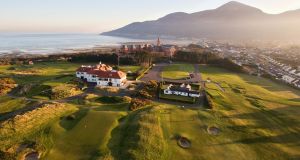 Royal County Down Golf Course beneath the Mourne Mountains

From the bracing peak of Slieve Donard to the low hills of the Ring of Gullion, natural beauty abounds in Counties Down and Armagh. Whether hiking’s your thing, delving into ancient folklore or simply relaxing alongside spectacular views, there is plenty to discover less than two hours’ drive from Dublin. And with the current exchange rate offering excellent value, there’s never been a better time to visit.

It’s little wonder that the Mountains of Mourne (below) were immortalised in song. The dramatic Mournes form the highest mountain range in Northern Ireland (with the uppermost peak, Slieve Donard, measuring 853m), and their granite tors present an exciting challenge for hillwalkers.

Walkers can follow an old track known as The Brandy Pad through the heart of the Mournes, where smugglers in the 18th century would load horses with illicit tobacco and alcohol before trekking through the mountains. Rest assured that these days, you’re more likely to bump into fellow walkers than contraband smugglers, with the Mournes regarded by many as offering the best views in the North.

Near Slieve Binnian you’ll find the Silent Valley and Ben Crom reservoirs, which are ideal for a more leisurely stroll with their tranquil parkland, lakes and ponds.

In County Armagh, the highest peak can be found at Slieve Gullion (around 573m). The mountain, bedecked in heather in autumn, is surrounded by the Ring of Gullion, which is steeped in folklore thanks to its associations with Cuchulainn and the Red Branch Knights.

Cuchulainn also casts his sizeable shadow over Navan Fort (above), two miles from Armagh City. The ancient Emain Macha was home to the Red Branch Knights and believed to be the earliest capital of Ulster. Visitors can experience a replica Iron Age dwelling where during the summer season (April to September) or for pre-booked group visits throughout the year, watch living history characters cook meals and carry out daily tasks from 2,000 years ago.

If two millennia aren’t quite long enough ago for you, pay a visit to the Murlough nature reserve’s 6,000-year-old sand dune system (below). Located at the edge of Dundrum Bay and the Mourne Mountains, the dune fields are home to many species of butterflies and moths. It’s also a great area for walking and bird-watching; see if you can spot a pale-bellied brent goose, little egret or wading dunlin.

A manicured alternative to the wild Mournes and Murlough nature reserve can be found at Castle Ward, an 18th century mansion overlooking Strangford Lough in County Down. It boasts a sunken, four-tier Victorian garden. And Game of Thrones fans will want to seek out the Georgian farmyard, which was one of the locations used for the Stark family’s Winterfell.  Finish up with some tea and freshly baked scones in the Stableyard tearoom.

There’s more horticultural heritage to be found at Mount Stewart (below), also on the shores of Strangford Lough. The formal themed gardens were the brainchild of Edith, Lady Londonderry in the early 20th century, and have been listed as one of the top ten gardens to visit in the world.

They include the Shamrock Garden, reflecting Edith’s love of Irish mythology, and the Spanish, Italian and Mairi Gardens. Visitors can explore the house itself, which recently underwent an £8 million restoration programme, and there are around 10 miles of walking tours.

If you don’t fancy hiking the Mournes, the point where the dark Mourne sweeps down to the sea (as the Percy French song goes) can be enjoyed blister-free from the luxurious surrounds of the Slieve Donard Hotel and Spa. Its swimming pool features floor to ceiling windows overlooking a beach at the foot of the mountains. Treat yourself to the spa’s ocean and earth body wrap treatment, which features algae or marine mud and essential oils.

In Moira, County Down you’ll find Wine and Brine, described by this newspaper as a “properly great destination restaurant”. Its menu brings together traditional processes such as fermenting and brining with contemporary dining trends and the freshest of produce. The imaginative dishes include fillet of hake, shin cannelloni and seaweed buttered greens, and cured sea trout with Vietnamese dressing and oyster mayo.

Down also plays host to some excellent seafood restaurants, including Curran’s Bar and Seafood Steakhouse in Downpatrick (voted best seafood establishment at the Food Awards Northern Ireland 2018), Katch 27 in Newtownards (voted County Down’s restaurant of the year) and the Lobster Pot for fresh lobster and mussels overlooking Strangford Lough.

Armagh is known as the Orchard County thanks to its abundance of apples, so no visit to the county is complete without sampling some local cider.

Prices at the Slieve Donard Hotel and Spa (above), less than two hours’ drive from Dublin, start at £65 per person sharing.

Another good base for exploration is the Canal Court Hotel and Spa, on the banks of the Newry Canal and less than an hour and a half’s from Dublin by car or public transport. Prices start at £55 per person sharing (and there’s currently a Christmas Shopping offer of £99 per couple).