An international focus through its curriculum and global connections will help set Nord Anglia International School apart when it opens in Dublin in September, says its principal Paul Crute 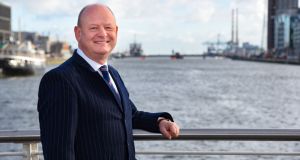 Paul Crute, the newly appointed principal of Nord Anglia International School Dublin, is busy recruiting teachers worldwide in preparation for September’s opening of a new state-of-the-art school in Leopardstown, with an internationally lauded curriculum and a contemporary approach to learning.

Its first intake of students, aged 3 to 14, is expected to be drawn heavily from professional and diplomatic families new to Dublin. But Crute says a substantial number of pupils will come from Dublin-area households determined to give their children the most holistic and outward-looking education possible.

At Nord Anglia, students will find a school nestled beside Microsoft’s Ireland headquarters and connected through high-tech links to the 53 other Nord Anglia schools worldwide, from Chicago to Shanghai. They’ll be encouraged from their early years to work with charities at home and, in their teens, in relief work abroad as part of the school curriculum which aims to produce students committed to making the world a better place.

This is a school that will be like no other in Ireland. Instead of the Leaving Certificate, it plans to offer students a secondary-level diploma with worldwide recognition for university admissions, the International Baccalaureate, or IB.

The International Baccalaureate is a global passport to higher education, first and foremost, but it’s much more than that

Its student/teacher ratio of 22:1 will be different too - classes will be comprised of no more than 22 students each, allowing it to deliver a highly personalised education to every child.

Nord Anglia also strives to ensure top-notch teaching through programs like Nord Anglia University, its bespoke training program which is open to all teachers for the purpose of their ongoing professional development, as well as an Executive Master in International Education programme developed by King’s College London.

“The Nord Anglia International School Dublin is attracting world-class teachers and will offer a truly transformational education. The children will get the most personalised learning experience possible. They’ll become the best they can be,” says Crute, who has held teaching and leadership roles at Aiglon College in the Swiss Alps, Gordanstoun in Scotland, the British International School in Cairo and, for the past 15 years, as headmaster of The Royal School, Armagh.

“The International Baccalaureate (IB) is a global passport to higher education, first and foremost, but it’s much more than that.

"It seeks to educate the head, the heart and the hand,” says Crute. “It does focus, as part of its core principles, on the very meaning of life. And the meaning of life is to live a life of meaning. That meaning comes from service, to make a social difference to the world.

“The school will be deeply transformational, producing exceptionally well-rounded children. To obtain the IB Diploma, social action will be a requirement. We aim to develop compassionate learners who will be globally minded.”

Crute says corporate recruiters and relocation experts have shown great enthusiasm that Ireland is getting a next-generation school. Multinational companies in many other countries seek such private international schools as a first choice for the children of their mobile employees.

“If you are a global executive and you’ve done three years in Dubai and they’re sending you to Dublin for three years, and you know you’re going to go to Quebec next, you will prefer your children to be able to pursue the IB, seamlessly, in all three places.”

“Our students will be encouraged to read outside their cultural boundaries. It won’t just be Shakespeare, Heaney, Behan, Yeats or Housman. They will be as likely to read a Ghanaian author or a Vietnamese poet as they come to appreciate world literature.”

He sees Irish as one of the languages among many options as another attractive element. However, Irish will not be compulsory.

Prestigious American expertise is a big and growing part of the classwork, too, thanks to Nord Anglia’s teaching partnerships with Massachusetts Institute of Technology (MIT) in Boston and the Juilliard School for the performing arts in New York. These collaborations are a key part of Nord Anglia’s focus on connecting subjects together, and on transferable skills such as confidence, creativity and collaboration, which they believe will be vital in the future when an estimated 65 per cent of the jobs of tomorrow haven’t been invented yet.*

The Global Campus is another standard feature of Nord Anglia Schools that will be on offer to Dublin students. So for example, Crute says, “when you walk into the reception of NAIS Dublin, there will a large video wall where you may see a Nord Anglia class in Cambodia collaborating with students in Dublin on a water purification project as part of a Geography lesson.”

He says the incoming Dublin-based students will become part of an intercontinental dialogue, chatting and comparing class notes with students worldwide. They will also be free to arrive early and stay late in what will be a campus-style environment. A parents’ café will offer a relaxed common space where parents can connect and socialise, a feature highly valued in top international schools around the globe by locals and recent arrivals alike.

“We’ll operate dawn to dusk. We are a family of 54 schools in 24 countries globally and we’re all connected virtually. Infused through the curriculum will be this connection to the other students,” he says. “Our students will be free to come early or stay late and talk to school friends on the other side of the world.”

In addition to the expatriate families arriving with the many multinational companies relocating to Dublin with Brexit, the school reports that Irish families returning from abroad are showing strong interest in the school, searching for a continuation of what their children experienced in their last international school. Crute also thinks an increasing number of local Irish families will find having their children educated through the IB curricula an appealing alternative to the Leaving Cert.