The superboss: how to spot one and how to be one

Becoming a superboss is almost as attractive as working for one but, why are they so rare and why are there more men than women?

Superboss: it’s the term coined by US management guru Sydney Finkelstein in his latest bestseller, Superbosses – How Exceptional Leaders Master the Flow of Talent. It gives businesses competing in the ‘war for talent’ a battery of new weapons for their armoury.

The inspiration for the book came when Finkelstein’s academic research threw up an unexpected finding; of the top people in any given industry, often as many as half will have worked for the same well-known leader at an earlier stage in their career.

“A superboss is a leader who helps other people get better. Over the course of their career, they launch the careers of others,” says Finkelstein, who is Steven Roth Professor of Management at the Tuck Centre for Leadership at Dartmouth College, an Ivy League university in New Hampshire.

In Ireland, he identifies Denis O’Brien of Digicel and Caroline Dowling of Flextronics as examples. The late Tony Ryan of GPA is another candidate, having launched Irish aviation bosses around the globe.

The good news for regular bosses is that the traits of a superboss can be learned. The challenge is that emulating them requires a radical reassessment of current thinking in relation to recruiting, retaining and, ultimately, relinquishing talent.

To be a superboss means empowering and developing protégées. The risk in doing this has always been that the protégée may then leave to progress their career elsewhere. Where a regular boss will be concerned by “churn”, a superboss takes a longer-term view.

“Rethinking retention is probably the single most controversial thing I learned in the course of my research,” says Finkelstein.

“Of course, everybody cares about talent retention in their organisation but how you do it, that is the question. Unfortunately, when you talk to senior executives, they often say things like ‘Why would I want to let my best people go?’ But look at that use of language - that’s not something you get to control. People have free will.”

Superbosses take a different approach. They seek out talent and throw responsibility at it, the earlier the better. They empower their protégées to grow and, if and when they do outgrow the organisation, they maintain good relationships with them. In so doing they build networks that add value to the organisation long into the future.

It’s a mindset that works particularly well with millennials, that generation of employees who came into adulthood around 2000.

“Millennials have a different mindset,” says Finkelstein. “They are not looking to stay in any organisation for 10, 20 or 40 years. For organisations, the challenge is how to be strategic about this. What superbosses do is develop networks of protégées and team leads.”

They do this in the full knowledge that a developed, skilled and confident protégée will most likely leave and go on to even greater success elsewhere. The irony is however, that employees who feel they are developing and growing within an organisation are actually less likely to leave.

“The best way to retain talent is by stopping this continuous fixation on retention as being the ultimate goal. Once you do that you’re going to find that people are going to stay longer. What’s more, once people outside the organisation know yours is a place where successful people work, talent will be knocking at your door.”

Superbosses in his book are characterised as extremely confident, competitive and imaginative. The vast majority are also male. 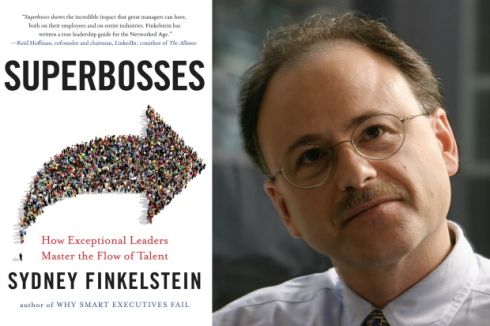 This lack of gender balance is something that concerns him but is, he feels, a function of time. Finkelstein tried to rebalance that but the data spoke for itself. “By their nature superbosses are hard to find and I was looking for people who had a 20- or 30-year track record of protégées we could look at. It is, I think, a function of time and the history of business. But we are going to see more women superbosses emerge,” he says.

Interestingly, a facet of the superboss’s mindset should favour women, particularly in relation to the unorthodox approach they also take to recruitment.

“Superbosses think about recruitment quite differently. They are more open to hiring without even having a particular job spec in mind. They are always on the lookout for talent. They take the view ‘is there anyone out there we should be interested in?’ The way superbosses look for untapped talent leads them to look in talent pools that others have passed over, including women and minorities.”

The result is that superbosses typically have greater diversity in their workplace. “It’s not that they set out looking for diversity, rather that diversity is the by-product of a mindset that is always looking to seek out the world’s best talent,” he says.

Millennials ‘get’ the concept of the superboss more quickly than most, he reckons.

“When I speak at conferences it’s the millennials that are all nodding their heads. They are all over this. The fact is, if you work for a superboss, you have no choice but to make an impact. That’s what millennials want. They don’t want to be pushing paper, they want to make a difference,” says Finkelstein.

To attract them therefore, don’t underestimate the importance of the boss you give them. He says “the single best trainer in any organisation is a person’s boss. The primary trainer is the person they work with every day and the best leaders are those who help create other leaders. How could your organisation not be more successful by helping the people around you become more successful? It’s a no brainer.”

Being a superboss means helping your protégées succeed to the absolute limits of their potential. And to those who bristle at the thought of having to invest so much time in the ranks below, be warned - you are no superboss. “The guy who says I don’t have time to develop protégées? That is the very definition of a second tier player.”