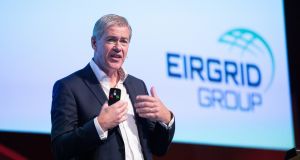 Eirgrid chief executive Mark Foley: ‘Seven communities around Ireland got the money together to put the projects in place.’

The first auction held under the new Renewable Electricity Support Scheme (RESS) has resulted in almost 500MW of onshore wind projects, 796MW of solar projects, and a further small amount from community projects being identified as provisional winners.

“This represents a fantastic start for the Government’s Climate Action Plan,” says Eirgrid chief executive Mark Foley. “It’s a great result all round. It’s very exciting and is a positive step towards reaching the 2030 target of having 70 per cent of our electricity generated from renewable sources.”

Eirgrid was tasked by the Department of Communications, Climate Action and Environment with implementing and operating the majority of the process within the auction. “It was a great first outing for us as an energy ecosystem,” says Foley who explains that the auction was significant in that it marked a move from the previous ReFIT or feed-in tariff system to a competitive bidding model.

The ReFIT scheme used an incentive-based model which guaranteed developers a minimum price for the power supplied to the grid for 15 years after a project came online. If the price of electricity exceeded that level at any stage the price paid to the developer increased in line with that.

Under RESS, the developer offers power at a certain price and that is the maximum price they will receive for the duration of the contract regardless of market prices.

“That represents a significant transfer of risk,” Foley notes. “In fairness, the old model served Ireland well in getting close to the 40 per cent renewables target by 2020. The new system is more competitive and delivers better value to the consumer.

“There is always a fear in a process like this that people won’t turn up to an auction and that, if they do, they might look for ridiculously high prices. Thankfully, they showed up in numbers and were very competitive in the prices they offered.”

Indeed, the average price achieved was significantly lower than that paid to producers under the ReFIT regime.

“Onshore wind has delivered extraordinary benefits for Ireland,” says Foley. “In the first six months of 2020, Ireland was the number one country in the world for onshore wind and it continues to deliver on the back of what has been done over the past 20 years.”

The inclusion of solar energy is significant. “Solar has arrived,” says Foley. “Just under 800MW landed in the auction. There has been a debate over the potential of solar over the last 10 years but it has now put its flag in the sand and arrived in quite a spectacular way. It complements onshore wind in that it delivers most power during the summer months when the wind doesn’t blow that much.”

Community projects are an important component of Ireland’s overall energy strategy, according to Foley. “Seven communities around Ireland got the money together to put the projects in place. It was a great day for those communities which can now develop their own renewable energy projects and sell the energy back to the grid. Communities have a significant part to play in the transformation of our electricity system.”

It is envisaged that there will be a minimum of four auctions between 2020 and 2025, so we can expect three more in the next five years. And these will likely include offshore wind projects which will be larger in scale than onshore windfarms by an order of magnitude.

Onshore projects were not included in the recent auctions for two reasons. The first was the qualification criterion that projects be operational within a two to two and a half year timeframe. The second related to the limitations of the existing planning regime for the marine environment.

“A new offshore planning and development bill is due next year, and the Government has offered relevant projects status to six projects in the Irish Sea which have been trying to get going under the old system. This will recognise that they have been in gestation of the past decade, take into account the work already done and allow that to be migrated into the new regime.”

There will be an economic benefit as well. “These projects will represent an investment of over €1 billion and will generate thousands of construction jobs,” Foley says. “That is all private capital, there are no Government handouts involved. It’s a net injection into the Irish economy as we move into the next stage of our energy transformation.”