Telephones: dialling up the energy at the Hop House 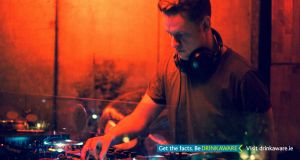 John Mahon says Telephones is his way of continuing to “run parties, have fun and play the music we want to play.”

John Mahon has been running club nights since he was too young to get into clubs. “I started DJ-ing at parties for friends when I was 15,” he says.

“As a kid I was just really into music, mainly soul and funk. I was a bedroom DJ at that time when things were changing and the personality DJ was taking off.”

Though he studied design at college, it was club nights he excelled in, joining fledgling events organiser Bodytonic when it was just taking off. He spent years with it, eventually opening up and running the Bernard Shaw, one of Dublin’s best-loved venues.

Three years ago Mahon left to set up his own events group, starting with DJ collective Telephones, organiser of quirky parties in interesting places, both day and night. He also set up TheLocals.ie, a Dublin city guide that shines a light on the capital’s creative energy.

“When I was running the Bernard Shaw I had this great platform to experiment with events, ideas and bring together all sorts of different people. When I left I missed that. So TheLocals.ie is a way for me to stay curious about and involved in what’s going on in the city, and is a platform to share it.”

Telephones is his way of continuing to “run parties, have fun and play the music we want to play.” Getting a great party right “is all about attention to the right details,” he says. “Telephones is about interesting spaces and galleries around Dublin. Some are ticketed and some are free. They often take place in the daytime because if you do the daytime, you get more time. You have to crack it though – the right location, the right circumstances and – in some cases – the right weather. The stars need to align but we do it for the love of it.”

One of his favourite venues for Telephones is the monthly club night they run at Yamamori Tengu on Ormond Quay. “It has an events space at the back that is small and intimate, just off the beaten track. People have to find out about it. That way you know it’s not just people walking in off the street looking for a late drink. It’s people who made the effort to find us and came to dance. It’s just a great party every four weeks.”

Mahon recently opened his own bar, Lucky’s, on Meath Street. Here too it’s all about getting the ambiance right. “It’s still in its infancy but it’s a neighbourhood bar with a pizza kitchen, DJ and art. It’s a contemporary modern bar in the Liberties.”

It’s the day job that allows club nights to be more than that. “Club nights are a hobby and always should be because you tend to love your hobbies.” It’s why when Hop House 13 got in touch to see if Telephones would collaborate on an event series, we said yes.

“The guys from Hop House 13 were at Telephones and were into the music we play and how we do things. They asked us to programme music for their series of events in Whelan’s, Wigwam and the Bernard Shaw, trusting us to bring in DJs, bands and friends that we think will really work.”

The idea is to bring together DJs, street artists and local food vendors to create an event, The Hop House, an interactive experience taking place at various dates and venues in April and May. “We brought in the Yankari Afrobeat Collective, a mostly Dublin-based band full of energy. Yankari were amazing at the launch event at the Bernard Shaw. As a 12-piece band it almost shouldn’t have worked in such a small space but that’s why it did, they looked and sounded great. You have to experiment,” says Mahon.

“We’ll be using the basement room at The Hop House event at Wigwam, which is one of the best club spaces in Dublin. It has low ceilings, like all the best clubs have in my opinion, which helps to create and contain a really intimate atmosphere.

“We’ll have Jimmy Rouge, the DJ and producer behind new Dublin label Orange Tree Edits, who is getting a lot of international interest and who is based in Amsterdam but coming home for The Hop House.”
Whelan’s will feature Ships, Sorca McGrath and Simon Cullen’s band which recently won the RTÉ Choice Music Prize for its album Precession. “It’s just great to see them getting the recognition they deserve,” says Mahon.

“The Parlour at Whelan’s is a great place to see a band like Ships because you’re right up there with them, not separated by barriers in front of a stage.”

Mahon will be there too, overseeing it all, like all good party hosts. “You don’t invite people over to your house and not show. And I get so much enjoyment out of doing it because we do it for the right reason, which is to put on a good event.”

Brewed with 100 per cent Irish barley, Hop House 13 is a crisp and full-flavoured lager with subtle malty notes and fresh hop aromas with hints of apricot and peach. It has a versatile taste and character and so pairs well with a wide selection of street food styles, as guests will experience at The Hop House.

Uber cool and contemporary Chinese eatery, Hang Dai, has created an update of the classic Super Noodles dish especially for The Hop House event series. Hang Dai’s Super Noodles include crispy squid, in a deliciously light batter, with a wild garlic sauce. The spicy noodles are perfectly complemented by the floral and citrus notes of Hop House 13.

The Hop House will pop-up in two more of Dublin’s most charismatic and vibrant venues, following the recent launch event in the Bernard Shaw on Richmond Street.

The Hop House will next be transported to Wigwam (April 26th) and Whelan's, Wexford Street (May 11th).

Tickets available from thehophouse.eventbrite.ie and include:

Brewed with 100 per cent Irish Barley and double-hopped for more taste and more character,Hop House 13 is a lager with a rich malt flavour, notes of peach and apricot and an extremely clean finish.

Double hopped means hops are added at two points in the brewing process to bring out more flavour and aroma.