Brewing a Better World: For Cork director Lochlainn McKenna, capturing Heineken’s sustainability message for the screen was a passion project 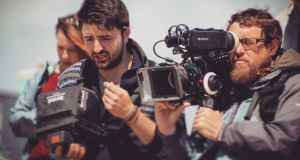 Director Lochlainn McKenna: 'It’s my goal to make something that is very engaging and accessible'

Lochlainn McKenna and Heineken have a lot in common, not least a strong Cork connection and a passion for the environment. A Rebel County native, the 25-year-old has been chosen to produce the brewing giant’s latest video in Ireland showcasing their sustainability initiatives – and the dynamic young director’s style means we are in for something a bit different.

A graduate of film and theatre studies in University College Cork, he made a brief foray into acting – “I quickly realised that wasn’t for me” – before segueing into production and eventually a career as a freelance director. “I never really planned it, it just happened kind of organically. I am certainly not one of those traditional directors who spent their childhood watching films.”

In his short career, McKenna has won several awards and been nominated for countless others. Heineken became aware of his work in music videos and commercials.

"The company are unquestionably walking the walk when it comes to sustainability," he says. "They’ve moved to renewable sources of electricity, none of their waste goes to landfill, and are working steadily towards a major reduction in their carbon emissions. They’ve also consciously spent €100 million with local suppliers." McKenna says this made him even more invested in delivering the video.

Heineken are unquestionably walking the walk when it comes to sustainability

“I was discussing it recently with a colleague, and a lot of the time with advertising projects you can be left questioning yourself, about whether there is good in something. That wasn’t even an issue with this because it is about the environment and sustainability and, of course, it is good. I don’t even have to think about whether I am happy to be involved, it’s a no-brainer. Heineken are so committed to reducing their carbon emission, producing less waste, being 100 per cent renewable – if I can help the company get that message across, there is a wider benefit to doing that.”

McKenna appreciates that he was given a “blank canvas” to deliver the sustainability message in his own original way. “Often you are just given the storyboard and told to do that, whereas Heineken gave me the key points and just said, do what you want to do and we will work towards that.” He also admits that for some clients, the tone can be “too corporate”.

“In today’s world that just doesn’t work, and it’s my goal to make something that is very engaging and accessible.”

The resulting video shows various picturesque Irish locations changing in relation to Heineken's environmental message and stars Aron Hegarty, a young Cork actor who has appeared in Game of Thrones and Vikings.

Yet while this idea sounded good on paper, doing it in practice was a bit more challenging. McKenna admits it was a completely new idea. “I haven’t seen it done before – I am sure it has been – but I couldn’t find any examples.” Eight locations in two days also meant this wasn’t a straightforward shoot.

Eventually the team built a 360-degree dolly track, and by keeping the measurements the same at every location, the video can jump from a waterfall to a windfarm to bustling city centre instantaneously. As a filming device, it is certainly attention-grabbing. “It’s all about trying to come up with something that is more engaging and a little bit different,” says the director.

As soon as someone starts watching it, they will want to keep watching it

Getting all this across in 60 seconds is surely a challenge, but one McKenna thinks he has solved with the fast-moving pace of the video. “You want to give people a taste of what the company is doing but without being forceful about it or being too heavy-handed. It’s not supposed to be content-heavy – you aren’t bombarded with statistics.”

And naturally, it is tailored towards a social media audience – watch out for it popping up on your Twitter or Instagram feed soon. “As soon as someone starts watching it, they will want to keep watching it. Aron, our actor, is such a strong presence. People are more interested in companies that are ethical and sustainable – they want to know what brands are doing on the ground to make themselves more environmentally friendly.I think it’s important that big companies start talking about sustainability in a way that appeals to a broad audience – that’s why I’m pleased to have been a part of this project.”