Coca-Cola and Enterprise Ireland’s Thrive Project is helping food and drink companies build resilience and grow their businesses, despite the pandemic 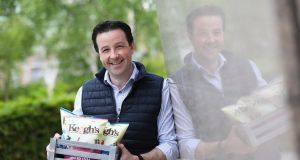 “Thrive is all about thinking big, that everything starts with an idea and that it’s good to dream big,” says Tom Keogh of Keogh’s Crisps.

If Irish food and drinks companies are not just to survive the pandemic but thrive during it, they’re going to need all our support.

That’s the view taken by the Thrive Project partners, Coca-Cola and Enterprise Ireland, as they help home-grown food and drinks producers adapt to evolving consumer habits and business trends while supporting them to move into new markets.

The leadership and innovation programme, now in its sixth year, typically brings the ambitious founders of Irish food and drink companies to meet with senior executives at Coca-Cola’s US headquarters in Atlanta, its western European headquarters in London and at Fruit Towers, the home of Coca-Cola subsidiary Innocent Drinks, while also participating in modules on international growth planning and strategic finance with DCU, the academic partner on the programme.

It is just one of a number of initiatives which the global drinks company has supported over recent months.

“Since March of this year, we’ve been focused on supporting our customers and our communities in any way that we can. We have had a number of initiatives supported by The Coca-Cola Foundation and have also helped our partners in the trade – hotels, restaurants, bars and cafes – as they continue to try to manage through a challenging year,” explains Petre Sandru, country manager of Coca-Cola Ireland.

“We are also really keen to continue to provide support to growing Irish food and drink companies – particularly those that have participated in the Thrive Project that we run in partnership with Enterprise Ireland.”

Since it was first launched in 2016, the Thrive Project has provided more than 30 Irish food and drink businesses with market insights and business coaching, designed to help them continue to build their companies and grow their international footprints.

This year Covid-19 meant Irish food and drink businesses had to adapt their business models.

“March was terrifying,” says Maxine Hyde of Ballymaloe Foods, who participated in the Thrive Project last year and remains in touch with its alumni.

The business specialises in relishes, dressings and sauces and, in a normal year, food service – wholesaling to restaurants and cafes – accounts for a third of its revenues. This year, orders fell as restaurants were forced to keep their shutters down. Instead of fretting about falling food service sales, Hyde focused on growing the retail side of the business.

“In March and April we increased our advertising and did a huge amount of print advertising on the basis that, while restaurants might be closed people could still go out and buy our products in shops, so we needed to call out to our customers as much as possible,” she says.

A groundswell of consumer support for Irish food products helped. “People were really trying to support local and they were eating at home more, which was perfect for our relishes. They also had more time to read, so newspaper advertising made sense,” she says.

It worked brilliantly. At the end of the year the business is on track to hit all the targets it set prior to the pandemic.

Developing a “Thrive” mindset helped, says Hyde. “One of the huge things I took from Thrive was a mindset of thinking big. That absolutely helped us this year,” she says.

The business continued innovating too, setting up an online shop, launching a range of selection packs for the Christmas-gift market and developing a new cranberry and prosecco relish.

For Daithí O’Connor, founder of supplement maker Revive Active, and another Thrive alumnus, this year provided an opportunity for growth as people sought out trusted products to help boost their immune system.

Revive Active responded by taking on additional staff and continuing to develop its export markets and ramping up development, with a new product launch set for early in the new year.

Apart from the support and camaraderie of fellow participants, who keep in touch on WhatsApp, the part of the Thrive Project that O’Connor found most beneficial was Coca-Cola’s sharing of its extensive consumer research, outlining the importance of trends related to trust, transparency and sustainability.

It expanded his network too. When O’Connor had queries about a particular aspect of Revive Active’s 2021 US market entry strategy, “a senior executive in Atlanta was happy to come on a Zoom call with me”, he says.

Luxury crisp-maker Keogh’s has also raised its game during the pandemic, growing its supermarket shelf space during the early days of panic buying and hanging on to it thereafter.

“We had invested considerably in building our capacity in the last couple of years. At the flick of a switch we were able to step in and supply more to supermarkets,” says founder and managing director Tom Keogh, who employs 120 people.

The company launched an online farm shop this summer and developed a new range of sharing popcorn – perfect for people watching movies at home. It recently added a Christmas-sharing bucket of crisps too, which is now its online bestseller, and continued to grow its global footprint by exporting to the United States and United Arab Emirates.

Keogh has even found time to develop a charity, Ireland Thanks You, which raised €100,000 for frontline healthcare workers.

“Thrive is all about thinking big, that everything starts with an idea and that it’s good to dream big,” says Keogh.

The Thrive Project will continue to support Irish food and drink businesses as the country moves to recover in 2021 and beyond, says Petre Sandru.

“In the months ahead we plan to continue to share our experiences of adapting to consumer and economic trends in a pandemic environment. Right now, we want to put our voice behind the call to support Irish businesses over this festive period. We know how important December is for companies in all sectors and particularly so for those in the food and drink industry,” he says.

By making the choice to support Irish brands, we can all play our part in helping to stimulate demand and support jobs within the local economy, he
says.

“At Enterprise Ireland, we know that the support of leadership development programmes such as the Thrive Project can continue to enable Irish food and drink companies with the capabilities to persevere.”

In the new year, Coca-Cola and Enterprise Ireland will roll out new virtual boot camp sessions for the alumni of the Thrive Project – all of the companies that have participated since 2016.

They can expect loads of fresh insights. “We are all learning so much as we seek to adapt and change to evolving circumstances,” says Sandru.

“We want to give these companies the benefit of our research and market knowledge but equally we anticipate that we will learn from them as to date, they have proven to be resourceful and creative and many have moved into new markets and launched new offerings despite the challenges of the year that we have all lived through.”