In the final part of our trading up series, we look at the return of the house and how to integrate the interior and exterior environment seamlessly, while maximising the garden layout to best suit your lifestyle 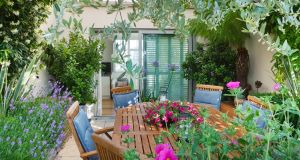 Designer, Sarah Jordan: “If you can only afford to plant one thing at the beginning, let it be trees." Photograph: Getty Images

A sunroom or conservatory was the traditional way of connecting a home with its garden but that trend has been bucked in lieu of “double glazed, floor-to-ceiling height slider doors, spanning from two meters to the entire breadth of the wall that leads onto the garden,” says Darrol Holden of Profile Systems, an Irish distributor of uPVC and aluminium systems. It’s a really effective way to make the average kitchen feel dramatically bigger and makes for a seamless transition between the inside and outside. Holden estimates the average 4.5 x 2.5 meter double-glazed uPVC or aluminium slider, costs from €6,000 to €8,000 (depending on finish) including fitting. “Clients are also getting braver and many are extending the glazed wall by adding a floating corner window too. It’s achieved by removing the corner bricks of a perpendicular wall and replacing them with glass panes, which opens up space considerably and gives a more panoramic view of the garden,” says Holden.

If you are investing in large glazed doors, a common design tool used by both interior designers and landscapers is to keep the threshold between the interior and exterior as level as possible, and mirror the style of flooring used in the kitchen on a patio or deck right outside as a classic way of blurring the boundaries.

If it’s not practical to use the exact same finish as the interior, choose a stone slab or deck board that is perhaps the same shade as the kitchen floor, and if you have large format tiles inside, reflect the shape on the exterior.

When presented with a garden in an average three-/four-bedroom semi-detached house in Ireland, garden designer, Sarah Jordan says the first thing she does is address the boundary. “Are there walls, bushes or fencing around the perimeter of the garden? I paint as much of the boundary as possible. If the walls are good, they get a few coats. If not, I add fencing or trellis and that gets painted too.” Jordan recommends sourcing basic fencing from the likes of Abwood in Co Wicklow from €26 for a 6ft shiplap panel which paints up very smartly.

“There’s lots of water-based exterior wood paints now, which are a lot easier to use than the tar-like exterior oil paints of old, that Brands like Colourtrend (€79.99 for 10ltrs) can match your exterior paint to any shade you like. A design trick we often employ is to paint the exterior fences/sheds/walls in the same colour palette that is used on the kitchen presses, islands and walls as this gives a nice continuity between the two spaces. Likewise, if there is an accent colour running through the kitchen, like a pop of yellow, I try and mirror it in a piece in the garden and paint a bench or a few large pots in the same yellow. It’s a very cheap way to make a strong design statement,” says Jordan.

Next, Jordan typically runs a deep flower bed along the perimeters, which she edges with decorative stone. “A mistake I see so often is flower beds and borders that are too narrow. Most planting needs a few feet of soil to flourish so be generous with this space.” She then advocates planting the borders with trees, grasses, bushes, shrubs and bedding all of the different heights as it gives a nice layered effect and draws the eye along the varying heights.

“If you can only afford to plant one thing at the beginning, let it be trees, as they anchor a garden and give better bang for your buck long term,” says Jordan. She recommends planting espalier or pleached trees in front of fences, which provide a privacy screen. Japanese maple and magnolia are another of Jordan’s failsafe trees, while the amelanchier lamarckii (juneberry) trees grow really well and speedily in Irish gardens, and require little maintenance.

Repetition is key with bedding and flowers, says Jordan; “flowers or shrubs just look better when there are a few feet of them growing in abundance together. They give off a stronger band of colour and look much more substantial than alternating colours and species along the same stretch.”

Once the perimeter walls and beds are ticked off, it’s time to plan the central areas including lawns, paving, paths and the various other areas: dining; play; lawn; shed; bins; patio; fire pit; vegetables.

This should really be determined by your lifestyle and needs: will you entertain outside or are you more likely to just have a morning coffee? Do you have kids who love playing football and need a decent lawn? Do you want to grow vegetables? Do you have time to cut the grass?  Think about your priorities and then map out a plan from there.

When researching where to place key garden zones, study the sun and wind patterns for as long as possible and use them to help determine the placement of each zone.

“Often people assume the best place for a dining table or loungers is on a patio just off the rear of the house. Whereas, in many Irish gardens the sunny spots are right down at the end, so that’s where to build a raised dining area. Shaded parts may be ideal for a kids’ play area, and the windy, dark parts are where you should put the bins. Start with one focal area and map the rest out from there,” says Jordan.

Jordan likes to delineate each zone with paths, a row of cobble or gravel, but warns against the current trend for using light and creamy stone as experience has taught her they are very hard to keep pale and moss free in the Irish climate. She suggests sticking with a palette of greys and earthy tones instead. Another of Jordan’s tips is to visit a properly laid out paving showroom, such as Millbrook Paving Centre in Co Wicklow, to see how a decent expanse of stone looks laid on the ground, as it’s too hard to decipher from a bag of gravel and a small tile sample.

For the final flourish, Jordan adds as many potted plants as possible. “Go big with the pots, as we underestimate how much space plants need to thrive. Use them to delineate zones, or to flank the doors and windows. The garden centre in Enable Ireland in Dublin 4 has a great selection of pots and all profits go to providing disability services, so it’s a win-win,” says Jordan.

If you’re moving in or moving on, for information about Bank of Ireland mortgages, visit bankofireland.com/homes