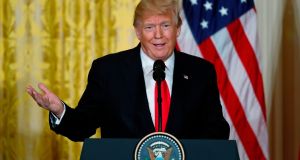 The Trump administration’s tax overhaul should accelerate major acquisitions by drug manufacturers in 2018 after a slow year for deals in 2017, according to senior executives from some of the largest US pharmaceutical manufacturers. The $1.5-trillion Bill, which US president Donald Trump signed into law in December 2017, lowers the income-tax rate for US companies to 21 per cent from 35 per cent, encourages them to repatriate cash, and modifies numerous deductions.

Brent Saunders, chief executive of Allergan, expects tax reform to finally clear the decks for big-industry consolidation. Such moves should materialise over months as companies study the new Bill and devise appropriate strategies. In the first half of the year, he expects to see more oncology deals like the one Celgene recently announced, a smaller acquisition of cancer-drug developer Impact Biomedicines.

Bigger, transformative deals – like the ones where large-cap pharmaceutical companies consolidate with rivals and biotechnology players – will likely take longer, bankers said. “I think the industry ultimately consolidates,” Saunders said. “I have a sense, though, in terms of a bigger wave of [mergers], it will either happen in the back half of 2018 or in 2019.”

The US pharmaceutical industry has been consolidating for years, even without tax reform. Large companies like Merck Bristol-Myers Squibb and Johnson & Johnson regularly buy or do licensing deals with small companies to help maintain a continuous pipeline of new medicines. But large-scale deals – like Merck’s $41.1-billion acquisition of Schering Plough in 2009, or Pfizer’s $68-billion purchase of Wyeth – have dried up. In early 2016, the Obama administration introduced rules that would punish companies for so-called inversion deals, in which a US-based acquirer bought a smaller firm overseas and moved the combined corporate headquarters abroad to benefit from lower tax rates.

The move scuttled Pfizer’s proposed $160-billion purchase of Dublin-based Allergan. Saunders said Allergan would only begin to look at smaller deals in the second half of the year as the company, known for its Botox anti-wrinkle treatment, as it is currently focused on cost-cutting.

Saunders’ comments echo those of healthcare industry bankers, who say uncertainty around the tax bill, drug pricing and Republican efforts to repeal Obamacare had cooled merger activity in 2017. Now that the tax law is in place, these bankers say, it should provide a catalyst to drugmaker deals by allowing them to repatriate billions of dollars in foreign profits held abroad, and by making it easier to agree on a value for their acquisition targets since they have a better idea of the company’s tax rate. Several drugmakers have already announced plans to bring overseas cash into the United States, including Amgen and Bristol-Myers, incurring some short-term charges.

Horizon Pharma chief executive Tim Walbert said that when larger companies benefit from that repatriation of cash, they are likely to lift the whole market. “To the extent that you see acceleration of large-cap deals . . . that will bring more confidence in the sector and allow for more strategic opportunities for everyone,” Walbert said. Horizon does not have substantial money parked overseas, and expects to continue its current strategy of small- and medium-sized acquisitions for drugs treating rare diseases, its primary focus.

Drug industry deals have been trending lower for the past two years. Thomson Reuters data shows that in 2017, there were $52 billion worth of pharma and biotech deals, less than 25 per cent of 2015’s $212 billion in deals and down from 2016’s $54 billion. Johnson & Johnson chief financial officer Dominic Caruso said that one reason deals were not getting done was that companies needed to borrow money in the United States, and because it was difficult to structure a deal with low enough taxes. – Reuters