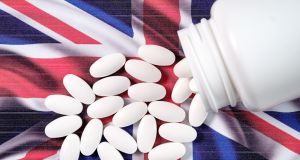 With about 60 per cent of medicines used tending to originate from or come through the UK, the UK “land bridge” is also highly utilised by pharma and life sciences companies looking to send their product to mainland Europe. Photograph: iStock

Major players in the life sciences sector are acutely aware that an eventual Brexit, whatever form it takes, brings both challenges and opportunities for the sector. The highly regulated nature of their business as well as immensely complex global supply chains could potentially make them vulnerable. Yet, like with any big upheaval in business, opportunity knocks, and Brexit may lead to positive developments for the sector.

Granted, with 3½ years’ notice, any supply chain potholes will have been logged and dealt with – most pharmaceutical and medtech companies will have strategic plans in place to deal with potential supply shortages, transit delays, or batch release difficulties.

Tim Cotter, associate director of business consulting with Grant Thornton, explains how dependent the life sciences sector is on UK access routes. With about 60 per cent of medicines used tending to originate from or come through the UK, the UK “land bridge” is also highly utilised by pharma and life sciences companies looking to send their product to mainland Europe.

“Brexit is likely to have a significant impact on this, with serious congestion at UK ports. But it isn’t a surprise that this is coming up and a lot of the pharma and medtech companies will already be looking at the availability of alternative routes where they might be able to bypass this land bridge,” Cotter says.

He adds that immediately following the result of the Brexit referendum, many companies made the decision to treat the UK as a third country for the purposes of their operations – “That has allowed them to plan early so regardless of what happens or whatever outcome there is, they have alternative options in place for their supply chain.”

For the medtech industry in particular, a device may be made up of many different components coming from different countries of which the UK might be one, so they would have already been looking at alternative supply chains in case they need to seek alternative sources, while stockpiling is most likely already taking place, Cotter adds.

According to life sciences partner at law firm Pinsent Masons Michael Finn, the life sciences sector is well-placed to handle any Brexit upheaval and have been hard at work since 2016.

“The sector is full of incredible problem-solvers and a large proportion of companies have taken steps to identify the key challenges that Brexit presents and how to meet them head on. In particular, supply and distribution chains have been reviewed, key contracts have been renegotiated, and regulatory permits have been transferred to ensure continuity and ease of supply both in the EU and the UK post-Brexit,” he explains.

And when one door closes, another opens – Finn adds that Ireland has both the infrastructure and talent to attract investment in the manufacture of complex biologics and advance therapies – from the US and even further afield. “There is a very solid foundation for further expansion and investment post-Brexit,” he says.

Yet he agrees that post-Brexit, it will no longer be possible to rely on a UK-registered entity to be the fulcrum for accessing the EU market, or distributing a company’s products, so supply chains are being altered to address this. To ensure continued access to the EU market, a number of multinational companies have already transferred some key operations and regulatory functions into Ireland, adds Finn.

“The Health Products Regulatory Authority [HPRA]has been very responsive and proactive in facilitating companies transferring regulatory permits to Ireland. The ease of access to the EU market has bolstered Ireland’s existing ‘can-do’ competitive advantage as a location of choice for big pharma companies,” he says.

Colin Kavanagh, partner at Arthur Cox, notes that Ireland is the largest net exporter of pharmaceuticals in the EU, and amongst the largest in the world. He also feels that Brexit has and will continue to create a range of challenges and opportunities for the sector in Ireland.

“We have been working with several organisations, helping them reorganise the contractual and practical aspects of their supply chains and moving and integrating aspects of their business that would have traditionally been UK-based into their Irish businesses,” he says.

“Although the impact of Brexit in terms of regulatory and customs alignment remains largely unclear, the industry in Ireland has had no choice but to expend significant resources in re-aligning regulatory approvals and supply chains pre-Brexit.”

But although the UK has traditionally been a regulatory hub for many life sciences companies, Brexit and the related move of the European Medicines Agency from London to Amsterdam has created opportunities for Ireland to have a more central role as a regulatory gateway to the EU, Kavanagh says.

“Ireland has a well-respected competent authority in the HPRA and, given the depth of Irish experience in the manufacturing and finishing of pharmaceuticals and medical devices, we have plenty of highly qualified regulatory professionals to assist with the transition.”

Kavanagh notes also that Irish-based life sciences businesses have had numerous regulatory challenges to contend with recently, including the Falsified Medicines Directive, the new Medical Device Regulations and Clinical Trial Regulations, not to mention GDPR and Brexit.

According to Elaine Daly, head of business consulting with Grant Thornton, regulatory changes and supply chain alterations are inevitable.

“UK suppliers will be subjected to EU regulatory requirements so there will be complications around importing authorisation, how they register medicinal products, labelling and packaging, controlling of batches including inspection and quality testing, as well as pharmacovigilance,” she explains.

There will be no “big bang”, says Cotter; certain transition arrangements will be in place and in the case of a trade agreement, costly administration and compliance costs may not be as big of an issue. In the event of a no-deal Brexit, however, tariffs could incur huge financial headaches.

“People are aware of the changes that are coming but the actual cost implications of those are uncertain and will be driven by a number of factors,” agrees Daly.