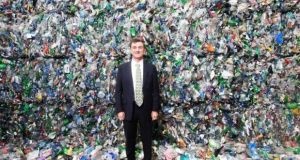 Séamus Clancy, chief executive of Repak Repak: “If you get people separating food waste at home, they will do it at work too.”

Business needs to move responsibility for waste from the maintenance man to the boardroom. So says Séamus Clancy, chief executive of Repak, on the changes corporate Ireland needs to make to meet its climate change obligations.

Repak is a not-for-profit packaging recycling scheme funded by contributions from more than 3,000 participating companies. Since 1997, more than €425 million has been invested by business, through Repak, to support recycling. As a result, recycling of packaging has grown from under 15 per cent in 1997 to an estimated 93 per cent in 2018.

There is a lot business – and Government – can do to reduce waste, he says. Paperless billing for a start – he is a big fan of the Revenue Commissioners’ decision to move individuals’ tax details online, ending the annual issuing of P60s to every worker in the State, but he feels more could be done. The local property tax, for example, could also be done entirely electronically, e-commerce and the removal of paper statements, the issuing of paper bags – “or bags of any kind” – for small purchases that could be carried in the box or packaging in which they were produced.

In offices, single-use cups for water should go. Many businesses are going back to the idea of “drinking fountains”, although he agrees the expression is a fancy word “for a tap”, and a glass on every desk. He says people are moving from the idea of a waste bin at each desk. We should now be considering what is waste, and what can be recycled. While people are aware of the energy used in heating and lighting, few are thinking about water in the cisterns. Cisterns, he says, should have a two-flush system, to allow users to chose a small flush or a large one.

Clancy says good practices can be ingrained, whether at home or in the workplace. “There are an estimated 400,000 apartments which do not have adequate waste-separation facilities. If you get people separating food waste at home, they will do it at work too,” he says. Responsibility for waste management needs to move from the man in the yard, to the boardroom and that involves decisions all the way along the line from procurement onwards, he says.

“Business has a responsibility to lead by example,” he adds.

Of course, assessing your business for a transition to a more sustainable use of energy does require some investment. In this regard, energy provider Energia has developed an innovative financial package that allows the client to have the work paid for out of future savings in their energy costs. According to Cormac Mannion, energy services manager with Energia, the plan is to let Energia do the heavy lifting.

Firstly, an energy assessment is made. “Sometimes in a new building you would find lighting was designed by an expert and it is all intelligently done,” he says. But in an older building, lighting tended to be one bulb for every few square metres. Nowadays, he says it is more complex and takes into account where people sit, the opportunities for natural light and even the type of light. For example, shop light is different to office light because shops need focused bright light while offices need light that won’t jar with the flickering light from computers.

Mannion says a “needs survey” in terms of lighting is the first move, and once costs are agreed with the client, Energia can finance, hire workers and see the project through. Clients pay for the work through reduced energy bills. “So if your electricity bill was, say €100, and with the retrofit it went down to €70, you would go on paying €100 for the duration of the contract to cover the cost of the changeover. “We take care of it all – the finance, energy assessment and the work, he says. When the contract to pay back Energia is completed, the client will benefit from the ongoing savings of reduced energy bills.” The company is also doing energy audits of appliances and office equipment, but Mannion says the lights are what, at least initially, catch the imagination of most people.

Taking the road to sustainability very seriously is the new rebranded An Post. Chief executive David McRedmond says the company has transitioned from “a rapidly declining, loss-making entity” into a growing, profitable business with a “sustainable”, green future.

McRedmond says sustainability was a key part of the company’s transition and the company is now leading a growing number of Irish businesses in the change to a more sustainable future.

In February, An Post announced its Eco Plan, which will result in all postal deliveries in Dublin city centre being carried out by zero-emission vehicles by year end. Zero-emission deliveries will be extended to Cork, Galway, Kilkenny, Limerick and Waterford by 2020. Some 750 electric vehicles will replace An Post’s urban fleet by 2022, with 200 on the streets this year, whether they be electrically assisted bikes or delivery vans. An Post’s plans also include having public charging points for electric vehicles outside post offices which will complement the 200-plus per year to be rolled out by local authorities, the expanding ESB network, as well other new entrants into the car-charging market such as EasyGo and Ionity. An Post also sees itself installing solar panels on its buildings and sharing the financial benefits through local community-based environmental initiatives.

Goals are also close to the heart of the personnel at Panda recycling, a former winner of the Repak Awards. Panda’s packaging and recycling division, which looks after paper, cardboard and plastic recycling, is a frequent recipient of accolades in the Repak awards. Panda believes in recycling as much waste materials as possible. Through best-available technologies and a specialist workforce, it has achieved a 100 per cent recycling figure with commercial customers, meaning a zero-to-landfill policy.

Panda is also working with Repak and the Department of Communications, Climate Action and Environment to help Ireland reach these plastic recycling targets. The aim is is to get more waste diverted from the black bin to the recycling bin and Panda actively encourages its 250,000 household customers to put all of their clean bottles, pots, tubs and trays in the recycling bin. If they did, an extra 6,000 tonnes of plastic each year would be recycled, the equivalent of 120 million two-litre drinks bottles.