Market for electric vehicles must get motoring to meet sales targets

Price is the main barrier in the Irish market, as well as a poor charging network, but newer EVs have decent ranges 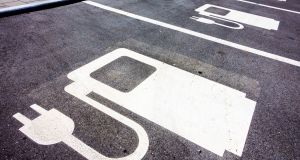 Range anxiety, the fear of the battery going dead halfway to your destination leaving you stranded, is still an issue for those who can afford the higher price of electric motoring

They are clean, mean, high tech machines which are more than capable of exceeding the legal speed limit on any Irish road. So, what’s not to like about electric vehicles? The latest estimates put the total number of electric vehicles (EVs) on Irish roads at slightly over 10,000 – that’s less than half of 1 per cent of the 2.7 million internal combustion vehicles in the country at the moment.

While the public may not have taken to these green machines in large numbers, the Government has certainly warmed to them. The Climate Action Plan has set a target of increasing the number of EVs on the roads to 1 million by 2030 – that’s an increase of 990,000 or an average of about 100,000 a year give or take the odd 5,000 here or there.

That’s a tall order and the early signs of the target being achieved are not good, and that’s putting it mildly. Despite grants of around €10,000 per car and free public charging until fairly recently, sales have been sluggish to the point of abysmal.

But why aren’t EVs more popular with Irish people at a time when environmental consciousness has reached new peaks? While range anxiety is often touted as a barrier to EV adoption, the main reason in this country is probably price. Even with the €10,000 subsidy, EVs are just too expensive for most people and you don’t really get an awful lot of bang for your buck.

“Price is the main barrier right now,” says Shane O’Donoghue, editor of Completecar.ie, an information and advisory service for motorists and car buyers. “When you look at the price of some of the cheaper models you might think it’s not bad but you are getting a smaller car for the same price as a petrol equivalent. If you look at the Opel e-Corsa, that will cost around €27,000 or €28,000 but that money will get you a nice petrol Opel Astra, a class above. You are not going to get someone who needs a comfy five-seater saloon for their family downgrading to a small car just because it’s electric. That’s one of the biggest hurdles.”

He doesn’t see much latitude for price reductions any time soon, however. “The price needs to come down despite the fact that you are already getting around €10,000 off the cost of the car due to the government subsidies.” He says part of the reason they are so expensive is the raw materials for the batteries are very expensive.

Range anxiety, the fear of the battery going dead halfway to your destination leaving you stranded, is still an issue for those who can afford the higher price of electric motoring.

“Customers see electric car ownership and electric car journeys as difficult,” said a Renault spokesperson. “In fact, owning an electric car like Renault’s Zoe is easy. Thanks to long ranges – Zoe can do 395km between charges – most charging is done at home. Ireland’s public charging network now has over 1,200 charging points, so it’s also pretty easy to tackle a longer journey. But, for customers to feel comfortable about the shift to electric cars, there needs to be still better coverage, especially in terms of fast charger hubs and in areas such as the west of Ireland which are currently poorly served.”

Thorsten Godulla, managing director of Audi Ireland, agrees: “At Audi, we have ambitious and exciting plans to accelerate electric driving from being a future concept, to being an every-day reality now. Audi is bringing electric mobility to a new level by introducing more than 20 electric vehicles by 2025 in the most important markets worldwide and achieve roughly 40 per cent of sales with electrified models. The local charging infrastructure is absolutely vital for the adoption of EVs in Ireland. The Government target of having one million electric cars on the road by 2030 is unattainable. The transition to electric cars will take longer and the infrastructure will need to reflect these numbers. There will be a transition phase until people will become comfortable and confident with the ability to charge their car without hesitance.”

The most important thing in the immediate term is that Ireland continues to develop its network of high-power charging stations, says Godulla. “To this end, Audi along with other car brands have worked with Ionity to ensure the creation and implementation of a fast-charging network in six key sites across Ireland. With these high-powered charging stations already open in Ireland [Cashel, Athlone, City North, Kill North, Kill South and Gorey] .”

But there are other charging issues to deal with. “It’s not just public charging,” says O’Donoghue. “We don’t have a solution for people who live in apartment blocks or who don’t have off-street parking.”

“As it is, anyone buying an electric car needs to have a charger at home,” says Godulla. “We look forward to seeing the charging system continue to develop over the coming years, as having the right infrastructure is just as important as having the right cars.”

Norway is often touted as an example of how a government can make EVs the default choice for car buyers. “Norway is a great example of how incentives can be used to help the transition, something which we should further consider,” says Godulla.

“In a market where EV share is close to 50 per cent, the Audi e-tron is the best-selling model. This is because electric cars are VAT-free, they can use bus lanes and have free parking. Norway also has an extensive charging network. All of these points can be looked at from an Irish point of view.”

Normalisation has been key, according to the Renault spokesman. “The government there has also provided many ‘in-use’ incentives, such as free parking, with the result that most customers think of an electric car as something that will make their life easier, not harder. That’s a critical difference – the normalisation of EVs. The bureaucracy that EV buyers are subjected to in Ireland puts people off – you can go into any new car showroom in Ireland and drive away the same day in a petrol or diesel car. And while Renault dealers always carry Zoes in stock, the bureaucracy always means there’s a bit of a wait before your new car is on the road. The Government must ensure an electric car can be bought as easily as a petrol or diesel one, and that supports for home chargers are streamlined so that customers can prepare their homes in advance of collecting their new electric car.”

He believes other technologies will have to be explored as we move to a low carbon transport future. “We all want zero emissions and clean air and a lower carbon footprint but there is no silver bullet. If affordability won’t change in the short term, maybe we should look at other ways of making the transition. The Government should not put all its eggs into the EV basket. 2030 is way too soon a date for when people won’t be allowed to buy a car if it doesn’t have a plug. Alternative fuels like hydrogen should be explored. They will certainly have a role to play in the commercial transport sector.”

Market for electric vehicles must get motoring to meet sales targets

Are robot taxis really the future?

Connected cars are already here, and getting smarter