Aviation finance: Big players have put Ireland on the map

The Government must ensure the country remains attractive to global lessors 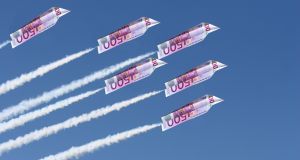 “Fourteen of the top 15 global lessors have operations in Ireland,” says Pieter Burger, lead tax partner, aircraft leasing and finance, with Deloitte. “This statistic is often quoted and, as such, can be somewhat passed over. But it highlights how significant Ireland is in the context of international aviation finance.”

Burger says the larger lessors by number of aircraft – including GECAS, AerCap, Avolon, SMBC Aviation Capital and AWAS – all have their headquarters in Ireland.

“To give an idea of scale, companies such as AerCap and GECAS have assets in excess of $40 billion each,” he says. “The number of Chinese lessors with Irish operations has also increased considerably.

“All of the ‘big four’ Chinese state-owned commercial banks – Bank of China, China Construction Bank, ICBC and the Agricultural Bank of China – have aircraft leasing operations in Ireland, as well as other major Chinese banks such as China Development Bank, China Merchants Bank, Bank of Communications, and also non-bank financial institutions such as Ping An Insurance.”

“If you think about it, all these businesses are here as a result of GPA; GPA was the mother lode,” Blaney says. “The Irish government was among the first to respond to new industry, and it set up the right corporate structures early on.

“The support services available from professional services firms is also crucial. Because of their work with GPA in the days when we were pretty much making it up as we were going along, they are better than or at least equal to the best you’ll find anywhere else in the world.

“The Irish Aviation Authority is another important part of the puzzle. It has been very helpful in terms of leasing and allowing aircraft operating in other parts of the world to be registered here in Ireland.”

However, competition from other locations is intensifying.

“China has recognised that Ireland is the place to do aircraft leasing but whether they will try to replicate what we have here remains to be seen,” says BDO partner Peter Carroll. “But you can’t replicate expertise and experience built up over 40 years overnight.

“We also have a very well-developed support framework and regulatory regime. It’s hard to see how the knowledge we have built up here can be replicated anywhere else. It’s not like a standard banking offering or a manufacturing operation where someone can start up in a green-field location and do it more efficiently.

BDO tax director Angela Fleming agrees: “Our tax treaty network is another major advantage. In more than 80 per cent of the treaties there is no withholding tax on aircraft leases. This puts Irish lessors in a much better position to do a deal than lessors in jurisdictions without those treaties.”

However, Ireland cannot afford to be complacent when it comes to holding on to these leading players, says Tom Woods, KPMG’s head of aviation finance and leasing.

“We have a very stable corporate tax regime and that’s very comforting for investors in an era of instability. But more needs to be done in the area of personal taxation,” he says.

“Fifty per cent plus in income taxes and charges makes it very difficult to attract new talent and retain Irish talent, in particular when compared to competing countries. Jobs in the industry are very high value. They are front-office jobs and they support a large ecosystem. The sector is very mobile and it could move if we can’t keep people here.”