There is a growing Irish presence on the final frontier 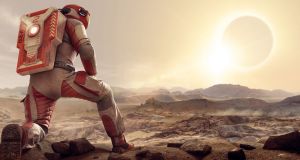 The Irish space industry is growing exponentially, and expanding rapidly to take in a whole range of technologies. Photograph: iStock

Space exploration used to be a two-horse race, the exclusive preserve of two major superpowers, each trying to outdo the other with ever-bigger rockets and ever-more advanced spacecraft. There was no room in space for the smaller players – only the US and Russia had the money and the resources to go into space, and the rest of us just had to sit back and watch it on TV, and leave it to the big boys to reap all the scientific and commercial benefits of space travel.

But now the landscape has changed, and space travel doesn’t seem a distant horizon anymore. Smaller countries can get involved in space exploration, even if they don’t have big rockets (or budgets) of their own, while the growth of the European Space Agency (ESA) has given eurozone countries a stake in the ever-expanding space sector. Technology has led to the democratisation of space, opening it up to everybody and making it accessible to anyone with the right idea and the perseverance to push ahead with it.

We’re still a long way from sending an Irish astronaut into space (although Neil Armstrong and his Apollo 11 crewmate Michael Collins both claimed Irish roots), but in June it was announced that Ireland is to send its first satellite into space – Eirsat-1. This is the next step in an ongoing process of co-operation between Ireland and the ESA. Irish companies have been working with the ESA for several years, developing technology for use on satellites, launchers and landers, and spinning the technology out into commercial applications on the ground. The sector is expanding rapidly, creating opportunities for more Irish firms to get into the race.

Enterprise Ireland is the body tasked with co-ordinating Ireland’s participation in European Space Agency programmes, helping Irish tech companies to bid for contracts from ESA and making sure Irish companies are developing technology that meets the needs of the international space industry.

“It involves dealing with the European Space Agency itself to make sure that what it’s doing with its programmes are aligned with our industrial strategy,” says Tony McDonald, Enterprise Ireland’s programme manager for co-ordinating Ireland’s industrial participation in the European Space Agency. “We have a very strong focus in Ireland on technology and innovation, and very innovative companies developing technologies for space – for human space flight, for satellites, for launchers, so we try and insure that ESA programmes are able to facilitate those companies to get involved in the programmes.

“The other side of the coin is that we then talk to industry, and tell them about the opportunities that are out there in the commercial space market, in the satellites and communications market, and how they can position themselves in that market and exploit the opportunity.”

And there are a lot of opportunities out there. The Irish space industry is growing exponentially, and expanding rapidly to take in a whole range of technologies, from communications to diagnostics to data analytics, all with potential applications on the ground as well as outside the earth’s atmosphere.

“If you look at the way the space industry is developing, it’s moving beyond governmental agencies and intergovernmental agencies into a more commercial scenario,” says McDonald. “We’re seeing a lot of new players coming in, particularly on the US side, but increasingly in Europe as well. The satellite industry is changing rapidly – in the past you saw these big satellites going into geostationary orbit, but it’s moving more to lower-cost, higher volume of satellites, and you’re seeing growth in the much smaller satellites, cubesats, so the nature of the satellite industry is changing rapidly and that in itself opens up other opportunities for companies.”

“That’s probably the most disruptive thing that’s going on in the space sector at the minute,” says Prof Lorraine Hanlon of the UCD School of Physics, who will head up the Eirsat-1 project. The satellite will measure just 10cm x 10cm x 10cm, but it will pack a huge payload of data-gathering technology into its small size – call it a smart-sat. And because it weighs just a kilo, it will be far less costly to launch than a conventional satellite. Among Eirsat-1’s functions will be to study gamma-ray bursts in deep space, a particular area of interest for Prof Hanlon, who is one of the world’s leading experts in these distant stellar phenomena, but it will also provide invaluable use as part of an educational programme for students, including the 18 students signed up for UCD’s Masters in Space Science and Technology, which she set up in 2013.

“That will be a big transformation for our ability because from the beginning we’re building the satellite, simulating its performance, building certain payload elements and off-the-shelf components as well, and we’ll be testing it and launching it in a couple of years as part of the education programme of ESA,” says Prof Hanlon. “It’s really for educating university students in building satellite systems and we’ve never done it in such a co-ordinated way before. It’s very exciting and we’ll operate the satellite from UCD so we’ll have an opportunity to actually communicate with the satellite.”

Developing technology for use in space is not a case of knocking up a few electrical bits and bobs, sticking it onto a metal cube, and tossing it into space. The technology has to go through a rigorous process to qualify for use in space, and it needs to be reliable and tough and keep working in extreme environments. But Irish companies are well up to the challenge, says Tony McDonald.

“We’re doing well in two aspects specifically. The first is in bringing innovative technology into the space market. Irish companies are coming in and finding new ways of using technology and adapting it for space. And this is where I believe we have a bit of an edge. The other area is in what the space guys call the downstream, and that means taking data from satellites and using it for a range of different applications, such as maritime or internet of things, or land use or farming or forestry. And for that you need companies that are very dynamic and very close to the market, who understand exactly what the market wants and what the end-user wants. And this is where Irish companies are well-positioned, because they understand the market very well, so they can take those space systems and adapt what they produce for those specific market applications.”

Among the Irish companies working closely with ESA in developing space technology are Cork-based company SensL, which is one of the world’s leading suppliers of silicon photomultipliers for measuring light; Radisens Diagnostics, also in Cork, which has developed a blood analysis system for astronauts that will eventually be used by GPs to test for diabetes, heart disease and kidney disease; and Dublin firm Curtiss Wright, which develops avionics and electronics for use in ESA’s next generation of satellite launchers. And that’s just the tip of the iceberg – Enterprise Ireland’s website has an ever-expanding directory of Irish companies working in the space sector and powering innovation within the industry.

For many of these companies, the sky’s the limit, but to stay in the game, they need to not just look outward into the heavens, but also keep one eye on the ground. For these tech companies to really maximise their potential, they need to spin out their innovations for commercial use, but because their technology has worked in a space environment, that just might give them the edge back on terra firma.

“The commercialisation of space opens up opportunities. And certain challenges,” says McDonald. “If you develop technologies for human space flight, they can also be adapted for use here on earth. For example, if you had someone in micro-gravity environments, there are issues around muscle tissue and bone tissue wastage, and if you can develop solutions for that, those solutions will have potential applications here on earth. So space represents extreme environments for companies to develop diagnostics or counter-measures to the physiological effects of space. And that’s a really important thing, because we’re seeing a growth in the number of companies in life sciences, looking at space as a means of developing technologies.”

And there’s another commercial benefit for companies working in the space sector – the kudos from their association with a major agency such as the ESA. “If you can meet the demanding requirements of ESA, it gives you a lot of credibility in the marketplace. A lot of companies would say, well, if you’ve done it for ESA, that’s good enough for us.”

For Ireland to have an even brighter future in space, it will be important for Government to support Irish universities in educating the next generation of space pioneers, and provide more backing to companies and start-ups who want to work in the sector, says Prof Hanlon. In 2015, she helped to set up the Irish Space Industry Group to promote the interests of companies working in the space sector and to help grow Ireland’s space industry. She envisages Ireland eventually having its own space agency that brings all the different aspects of the industry into its orbit.

“What I would love to see is a national research capability, with the science, engineering and technology hand in hand, that can spin out companies when the opportunities present themselves. We need something that’s much more strategic, much more joined-up and coherent moving forward, and I can see that being a huge success. There are many examples in Europe and around the world.

“The game has changed – the big-vision, big-science, billion-dollar missions are still the preserve of Nasa and the European Space Agency, but there is a whole other swathe of opportunity there that’s much cheaper – and much riskier, too – and there are big business opportunities for many companies. You have small countries who were never players before becoming very, very space capable, and what I would like to see for Ireland is that we don’t shy away from that challenge. That we recognise our talent and skills and our ambitions to participate. I think we need more of a national strategic view of space – it’s just a matter of having the willpower to make it happen and understanding the opportunity that’s there.”