Like the planet, the conversation on climate change is finally heating up 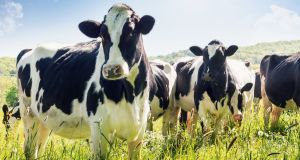 Part of the challenge facing Ireland is the fact that agriculture, and in particular the methane gas emanating from the national herd, accounts for one third of emissions, compared with one tenth in the rest of Europe. Photograph: iStock

In this country at least, the topic of climate change is not up for debate. There is widespread consensus both about changing weather and the cause of it. As a result, what to do in response has been a matter of mainly cool consideration, with just a few outbreaks of hot air. The real storms may be ahead.

In May, Ireland became the second country in the world, after the UK, to declare a climate and biodiversity emergency. The following month, the Government launched its Climate Action Plan, which warned that the “window of opportunity” to arrest the impact of greenhouse gas emissions “is fast closing”.

This is true. Last year’s Climate Change Performance Index, which looked at the action each country had taken in relation to its commitments under the Paris Agreement of 2015, ranked Ireland 48th out of 56 countries – the worst in Europe.

With more than 25 per cent of public investment over the coming decade linked to climate action, it’s important that every home, workplace and community is on the (electric) bus.

Part of the challenge facing Ireland is the fact that agriculture, and in particular the methane gas emanating from the national herd, accounts for one third of emissions, compared with one tenth in the rest of Europe.

But even setting aside agriculture, in all major sectors from electricity to buildings, transport and waste management, Ireland has a higher carbon footprint per head of population.

It’s why Ireland is set to miss its 2020 renewables target by 12 per cent, and its cumulative emissions targets by almost 5 per cent. If current trends continue, the country could be blown more than 25 per cent off course for its 2030 targets.

The Emissions Trading System, which allows the Government to offset activity through the purchase of carbon credits, is not enough. A holistic approach that touches on all aspects of Ireland’s future development is required, including ensuring future population centres are designed to be compact, efficient and sustainable.

It also requires fresh thinking about agriculture, and in particular investment in forestry. Forestry in Ireland grew from about 1 per cent of territory in the early 1900s to 11 per cent just over a century later. Yet the average in Europe is 40 per cent, which leaves Ireland second worst in Europe, after Malta.

Encouraging unprofitable beef farmers into forestry might have the double whammy effect of reducing methane and improving carbon sequestration but faces understandable resistance from both farmers and from members of the public unhappy with a proliferation of dark and gloomy Sitka spruce.

Public education programmes about the benefits of wood as a building material are necessary, if only to highlight the need to have such building materials locally grown rather than shipped in – on dirty bunker fuel – from abroad.

In the meantime, the Government’s Climate Action Plan refers to the need to develop a green strategy for public procurement, to ensure that environmental impact holds greater sway on purchasing decisions.

The plan also aims to grow the use of renewable electricity from 30 per cent to 70 per cent, adding 12GW of renewable energy capacity to the system, with peat and coal plants closing.

However, the decision by the ESB to close peat-fired power stations at Shannonbridge in Co Offaly and Lanesboro in Co Longford, taken because of a refused planning application to transition the plants from peat to biomass, demonstrates just how difficult such transitions may be for local communities to bear.

While the target is to ensure 100 per cent of all new cars and vans are electric by 2030, the motor industry has pushed back, pointing out that the goal for electric vehicle numbers does not align with the production timetabling goals of electric vehicle manufacturers.

Complicating matters further is the simple fact that electric vehicles are expensive, and outside of the reach of many buyers, even before the incentives that exist to encourage their take-up are set to reduce.

In its spending review papers, published in advance of Budget 2020, the Department of Public Expenditure warned that revenues to be lost to the State as a result of the migration to electric vehicles pose no less than “a substantial risk to the stability of the State’s finances”.

It also pointed out that the money set aside to incentivise their purchase would run out within two years. This poses a substantial risk to their affordability by buyers. The introduction by the ESB of fees for using the public charging network is also likely to have a negative impact on purchaser decisions.

The Climate Change Advisory Council, an independent advisory body, welcomed the Climate Action Plan but cautioned that some issues are not being addressed in relation to coasts, housing and planning.

“Awareness of the need for adaptation remains poor, with corresponding low levels of willingness to take necessary actions,” it said, highlighting the fact that adaptation will require significant investment from the private sector and households, as well as Government.

The Government’s plan to see 500,000 existing homeowners upgrade their energy efficiency through expensive retrofits is a case in point.

While there are a number of single-issue subsidies available to help with elements such as the installation of solar panels, new heating controls or insulation, through the SEAI, the withdrawing of the Deep Retrofit Grant, which paid up to 50 per cent of the bill, will act as a dampener.

There is also the question of where the skilled labour will come from to undertake this remedial work. At a time when young people are turning away from apprenticeships, and when those with the skills are likely gainfully employed in the construction of new houses, just who will be available to undertake the retrofits of existing ones is unclear.

The fact that residents will have to put their hand in their pocket and shell out the upfront cost, even if for long-term gains, is also an inhibitor.

In the US, home-owners can take out ‘Green Mortgages’, also known as Energy Efficient Mortgages, which lets them borrow money to pay for energy-efficient retrofits that may be costly up front but save money over the long run.

The European Investment Bank’s Smart Finance for Smart Buildings initiative allows financial intermediaries such as banks to develop attractive financial products for the energy renovation of buildings, especially homes. Yet it’s not a segment of the lending market that has been overtly pushed here. Traditional top-up mortgage-type products, which don’t promote energy efficiency, remain the norm.

The Government has committed to publishing quarterly progress reports for its Climate Action Plan, the first of which came out in October.

Among the key milestones achieved were a scheme for 1,200 new on-street public charge points for EVs, led by local authorities; new requirements to ensure all new homes are to Nearly Zero Energy Building standard; and the signing of a Local Authority Climate Action Charter by all 31 authorities.

Budget 2020 committed €31 million to a ‘Just Transition Plan’, also contained in the Climate Action Plan, which could, for example, help workers at ESB’s two peat-fired power stations closing down to reskill.

There has been action on the public procurement front too, with €12 billion of State investment each year to be invested sustainably. For homeowners, a retrofitting model taskforce was set up to look at grouping homes together in the same area to achieve lower costs and to look at easy payment models such as through utility bills, as well as at smart metering.

The smallest, but perhaps most important milestone noted was the eight town hall meetings that took place around the country designed to engage with local communities about climate change. Keeping that climate change conversation going matters enormously because, without public support, delivering on the government’s Climate Action Plan will be impossible, and that’s a cold hard fact.