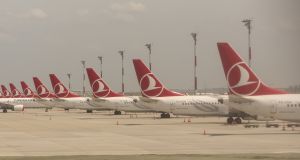 The grounding of the Boeing 737 MAX aircraft has the potential to cause even further disruption. Photograph: iStock

The grounding of the Boeing 737 MAX is distorting the market, both for airlines and lessors, and has the potential to cause even further disruption. “Boeing has now suspended production of the aircraft and there remains no clear line of sight as to when it will return to service. The situation is unprecedented,” says Joe O’Mara, head of aviation finance and leasing at KPMG Ireland.

More than 80 airlines have taken delivery of 385 MAX aircraft which are not currently in use and there are in the region of another 400 aircraft currently held in storage by Boeing.

“In the short term, the unavailability of the MAX has had a positive impact for some lessors as it has increased demand for older aircraft, with airlines looking to fill the void left in their schedules by the grounding. However, for larger-scale lessors, such as AerCap and SMBC, who had expected to take delivery of new MAX aircraft and place them on lease in 2019, there has been a negative impact on earnings,” says O’Mara.

“The longer the aircraft is out of service, the greater impact it will have on airlines, particularly if it impacts on the summer season, and if this leads to financial difficulties for airlines, there will be a knock-on adverse impact on the entire aircraft leasing community.”

“Any slowdown in the macro economy will have a negative impact on the aviation sector,” continues O’Mara.

“Factors such as the ongoing global trade disputes between the US and China, and to a lesser extent Brexit, are contributing to a slowdown in global GDP growth. This has been a contributing factor in global air traffic growth dropping from 7.4 per cent in 2018 to 4.2 per cent in 2019,” he says.

There may be more trouble ahead. Fuel costs make up more than 20 per cent of airline operating costs. “While oil prices were relatively stable in 2019, to the extent that geopolitical concerns cause increased volatility in the price of oil, this could adversely impact airline profitability and, by extension, aviation finance as well,” he cautions.

Brexit will have an impact too. “Once the UK becomes a non-EU country, then all imports from and exports to the UK will be subject to lodging customs declarations regardless of whether a trade agreement is concluded or not. This means there will be a customs declaration requirement for the movement of aircraft and parts between the EU/Ireland and the UK,” says Carol Lynch, partner in customs and international trade at accountancy firm BDO.

With increased paperwork comes increased risk of mistakes, including in relation to aircraft being moved post-lease. “Twenty three per cent of €100 million would be quite a significant mistake to make,” she says.

Further implementation of BEPS (base erosion and profit shifting) will have an impact on the sector, predicts Caroline Devlin, partner and co-head of aviation at law firm Arthur Cox.

“We have seen already the continued approach of lessors to further build substance, and this is a positive development. As new rules are implemented, with further interest limitation provisions expected in Ireland in 2021, this will further impact on the legal structures which lessors deploy. One hotly considered structure is the use of a regulated fund as a ‘topco’, which is likely to side-step many of the more difficult tax provisions.”

“One trend that is really to fore is the carbon footprint of airlines and how they are going to deal with it,” says Tom Conlon, academic director for the MSc in Aviation Finance at University College Dublin.

If there is regulatory pressure put on airlines from the top down to deal with carbon footprint, it could present lessors with an opportunity – they do at least have the youngest and most fuel-efficient aircraft.

However, the Swedish-born concept of ‘flygskam’, or flight shaming, means pressure is coming from the bottom up too. Sweden recently recorded a fall in the number of people flying via its airports, something “unheard of in the modern aviation industry”, says Conlon.

Carbon offsets are the obvious option, but how much are passengers prepared to pay? Battery powered aircraft aren’t going to take off any time soon. As currently configured, the amount required to fly a plane would fill a plane.

Aviation carbon tax is on the radar. “There has been growing sentiment among some member states and international organisations that air travel is both lightly taxed in the context of the taxes applied on other transport sectors and in the context of concerns regarding the catastrophic impacts of climate change,” says Carol Lynch of BDO.

“While airlines are part of the ‘EU Emissions Trading System’, aviation fuel used for the purposes of intra-EU and international commercial transport is not subject to any excise duties. Therefore, in Ireland, aviation fuels are exempt from excise duties – or ‘mineral oil tax’ – when used for the purposes of international commercial flight,” she says.

“2019 saw the collapse of several airlines, most notably Thomas Cook and Wow Air, and in each of these cases, financial insolvency was cited as the main reason for their demise. The high cost of running such a business can mean that margins are tight and taking this into consideration, the introduction of an aviation carbon tax is something that would need consideration in 2020,” says Lynch. “It would also particularly affect Ireland as an island economy.”

Carbon is certainly on the industry agenda, according to Eimer Hannon of Hannon Travel Services, a niche provider to Ireland’s aviation industry. It has just launched gocarbonneutral.ie, “to take the headache out of it for them”.