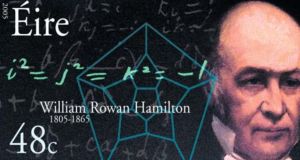 William Rowan Hamilton’s Eureka moment, which we were discussing yesterday, is not the only notable event involving an Irish genius to have occurred on October 16th.

There was at least one other, 11 years after Hamilton’s discovery of quaternions. He will not have been aware of it at the time, however, because it was a further several months later that he learned the news, and in somewhat eccentric fashion. Here’s how he described it soon afterwards, in a letter: “A very odd and original lady has also had a baby; such things, as you know, will happen . . . Recently, when I met her for the first time in my life she told me of this young Pagan as she called him. And she asked me to be a godfather, perhaps because she is an admirer of Wordsworth [Hamilton’s long-time friend] However, I declined.”

The lady was Jane Wilde, who made the strange proposal to Hamilton only moments after they had been introduced, at a dinner in April 1855.

The “pagan” was six months old by then, having been born the previous October 16th.

The friendship features in a recent book called Wilde Women, by Eleanor Fitzsimons. Which explains that although they may have been at odds on issues of godparenting (and on politics, she being nationalist and he unionist), what they had in common was a love of poetry – both reading it and writing.

From their subsequent correspondence, it’s also clear that Hamilton had great respect for Lady Wilde’s intellect, in general. Although on a visit to Dunsink Observatory, the north Dublin mansion in which the great scientist lived and worked, she was once moved to complain about sexual inequality, 1850s-style. Referring to his job, or the house, or both, she lamented: “Let a woman be as clever as she may, there is no prize like this for her”.

It was for a time, by his own account, a “toss-up” whether Hamilton would become “a rhymer or an analyst”. As the organiser of his annual commemorative walk, Fiacre Ó Cairbre, explained to me last Sunday, he was all his life a searcher for beauty. Eventually he devoted himself to finding it in maths. But Wordsworth may have helped tip the balance.

While protesting his enjoyment of the verses Hamilton kept sending him, the Englishman once expressed his fear that poetry “may seduce you from the path of science, which you seem so destined to tread with so much honour to yourself and profit to others”.

Wordsworth also suggested, delicately, that poetry was much harder work than it looked.

Successful composition depended on “innumerable minutiae”, he said, “which it grieves me you should stoop to acquire a knowledge of”.

He need not have worried. The danger of Hamilton becoming a poet soon passed. Instead, in his later years, he fully embraced the fate that his moment of inspiration in 1843 had thrust upon him. The quaternion formula was, as he knew, not the end of anything but the beginning of work that would dominate the rest of his life.

I don’t know whether Oscar Wilde ever realised that he shared his birthday with quaternions, nor indeed if Hamilton ever noticed the coincidence (he died when Wilde was only 10). But if they had little else in common, the playwright did at least share the scientist’s dedication to beauty. Wilde also made at least a small mark on mathematics, albeit unwittingly, via the title of one of his stage classics.

To advanced mathematicians, apparently, “Lady Windermere’s Fan” is a term given to a “telescopic identity employed to relate global and local error of a numerical algorithm”. For a somewhat wider audience, meanwhile, the play is best known for a quotation that – again unwittingly – could serve as a tribute to Hamilton’s life in Dunsink: “We are all in the gutter, but some of us are looking at the stars”.

If you’re in The Gutter (the Dublin bookshop, I mean) anytime soon, you can still buy the aforementioned Wilde Women there. But if you want to look at the stars, Dunsink is the best place to go. Luckily, the observatory has just begun its annual season of open nights. They run on the first and third Wednesdays of the winter months, from October to April.