Una Mullally: Who benefits from the system of direct provision?

Entire childhoods are being lost in the direct provision system 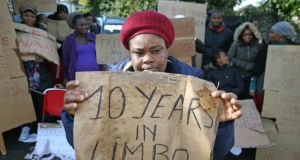 Asylum seekers protesting against conditions at Birchwood House direct provision centre in 2014: “Who benefits from imposing a structure on people that strips them of their dignity and identity?” Photograph: Patrick Browne

I believe most Irish people think the direct provision system is desperate. But most of us wonder what agency we carry as individuals to try and change it. What is very crafty about direct provision is that as much as it locks people in, it also locks people out. There are few access points for Irish people to engage with people living in the system. Although the centres are all around the country, we barely know of their locations or the conditions in them.

The work journalists such as Brian O’Connell, Kitty Holland and others have done in their reporting on direct provision has been crucial, as well as broader journalistic initiatives such as the Irish Times’s Lives In Limbo project.

But the media needs to question the system more robustly and bring the voices of those in this system to the fore. How often do we hear people living in direct provision on our radio and current affairs television programmes?

Who benefits from imposing a structure on people that strips them of their dignity and identity; from not enabling smart, talented, well-educated people to participate in our society? Perhaps once upon a time the system seemed adequate as a short-term stopgap. But “it’ll have to do” isn’t good enough when people are languishing in limbo for years, their lives and aspirations curtailed.

We certainly don’t benefit as a society. But some people do benefit. In fact, they profit from it. Direct provision is a multimillion-euro industry for companies such as Aramark (which recently bought Avoca for more than €60 million), which received €16 million from the State up to 2010 to run three direct provision centres.

Mosney Irish Holidays plc, which has made the rather dystopian shift from being a holiday camp to a direct provision centre in Meath, had a turnover of €8.8 million in 2009. This is not small change. This is big business.

Support groups are disparate, under-resourced and often inaccessible to the average Irish person, but we have to try to connect with the issue. Recently I have been involved with the Change of Address project, “a collective of artists seeking to increase the visibility of refugees and asylum seekers in Irish society through inclusive creative connections and events”.

It was only when Irish men started marching with Irish women for reproductive rights that many Irish women finally felt solidarity. It’s that spirit of solidarity that Irish people need to harness to stand up for some of the most vulnerable people in our country.

Our parents stood by when Magdalene laundries and industrial schools abused the children and women within them with impunity. Knowing what we know now, how can we stand by and let the institutionalisation of people continue to be embedded in our communities?