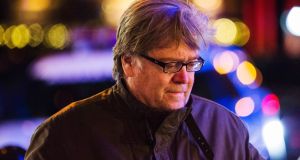 A small amount of media attention has been directed at a political consultancy firm called Cambridge Analytica. Hired by Republican super PACs and candidates, it was contracted by Ted Cruz’s presidential campaign, and in the final month of the race by Donald Trump’s.

Its board members include Steve Bannon, a prominent far-right commentator and Trump’s “chief strategist and senior counsellor”. Cambridge Analytica specialises in directing campaign advertisements to specific voters based on a psychological profile of their personality.

How does this work?

First, you ‘mine’ data. Demographic information about voters in a region is combined with information collected about some of the same voters privately (for example through surveying, online retailers, even ‘personality quizzes’ on social media).

From this pool of detailed information about some voters, statistical presumptions are made to create more detailed data about the rest. You don’t actually have this information, but you assume people are alike, and postulate details about everyone based on what you do know about some people.

Think of Netflix suggesting “You may like Y and Z”. To make these suggestions Netflix has reasoned: “This person is in a group of people who all watched X. Some of those people also watched Y and Z. Most likely, they all have the same preferences, so the ones who haven’t yet watched Y and Z probably want to, or can be convinced they do.”

Next, these presumed preferences, opinions and habits are used to build psychological profiles of individual voters. Using a body of psychological theory developed in the 1980s, people are rated on scales of ‘openness’, ‘conscientiousness’, ‘extraversion’, ‘agreeableness’ and ‘neuroticism’.

Political messages are crafted to evoke the desired reactions from each personality type. Rocky Mountain individualism for the open and extroverted, end -of-time dystopia for the neurotic. These messages can be delivered in any forum that allows them to be targeted at specific people, for the most part on social media, websites and some satellite television networks.

Data mining by political campaigns is nothing new, but individualising these statistical presumptions through psychological theory, coupled with media that can choose who sees which messages, is new.

It is alarming not because of data privacy concerns (though these should not be dismissed), but because it aims to manipulate the voter in a blatant and individualised way.

It is propagandist in the truest sense.

Propaganda was a field of social scientific research between the World Wars. It became increasingly militarised during the Cold War, and largely remains so today. Since the 1950s, few people have publicly investigated psychologically manipulative political communication.

The most prominent theorist in the area, Harold Lasswell, described propaganda as “the management of mass communications for power purposes”.

It is not untruth, but management, that distinguishes the expression of ideas in political debate from propaganda. Propaganda manages and manipulates. It may lie, but it need not.

Propaganda does not communicate ideas to a collective citizenry for the sake of persuasion. From a position of power it bears down on the individual as a solitary bundle of fears, anxieties, vices and uncertainties. It tries to achieve collective action through disunity.

Political communication will inevitably contain elements of propaganda. People want to manipulate other people’s opinions, to be elected, to pass laws, to be popular. However there are more, and less, insultingly manipulative ways of speaking politically.

Cambridge Analytica’s methods have evoked as much scepticism as awe in political consultancy circles. Regardless of their effectiveness, using psychological theory, however crudely, to isolate individual voters in bubbles of communication meant only for them and others presumed to be like them, clearly stands at the more manipulative end of the scale. If we are to understand and constrain such tactics, propagandist psychological politics need to be scrutinised and discussed once again.