Switzerland offers foretaste of the difficulties to come for Brexit 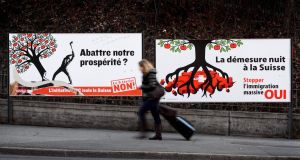 Electoral posters against and in favour of the immigration referendum. Now the Swiss are in the unenviable position of providing a test case for Brexit negotiations. Photograph: Fabrice Coffrini/AFP/Getty Images

The British vote to leave the European Union could not have come at a worse time for the Swiss, who are struggling to salvage their relationship with the EU since a national vote to curb immigration put a crucial series of bilateral treaties in jeopardy.

Now the Swiss are in the unenviable position of providing a test case for Brexit negotiations. Immigration controls are the major sticking point for both contrarian nations, and the European Commission has no intention of making any concessions to the Swiss that would encourage the British.

The stakes are high for the Swiss: trade between the world’s most competitive economy and the EU amounts to one billion euro every working day, 55 per cent of Switzerland’s exports and three-quarters of its imports.

When it became clear in the 1990s that EU membership stood no chance at the ballot box in Switzerland, the Swiss embarked on what they call “the bilateral way” to secure enhanced access to the single market. This model involved multiple tracks of negotiations, each lasting several years during a phase of good relations, and therefore not an easy route for the United Kingdom or any other “deserting” EU country to copy.

The bilateral agreements, covering 10 areas, were bundled into two groups – bilaterals I and II – and bound the Swiss to adopt a significant quantity of EU law verbatim. The agreement on the free movement of people came into force in 2002 as part of the first set of “bilaterals”, which also included agreements on agriculture, research, public procurement, trade, transport and aviation. Dangerously for the Swiss, these agreements were cemented together – rejecting one will nullify them all.

Home to the highest proportion of foreigners in Europe (one in four), not counting tiny Luxembourg, the Swiss have become jittery about immigration, especially since the populations breached the eight million mark in 2013. These concerns have been actively exploited by the populist right-wing Swiss People’s Party (SVP), who just happen to be the initiators of the vote against free movement.

Some 1.3 million EU citizens live in Switzerland, and 450,000 Swiss citizens reside in the EU. So far the rhetoric in Switzerland does not include any suggestion of sending immigrants back to where they came from. The official, though technically unattainable, Swiss objective is to return to the pre-2002 status quo of work permit quotas for EU workers.

Like their British counterparts in June 2016, Swiss voters accepting the 2014 “stop mass immigration” initiative either did not realise or care about the danger of losing access internal EU market.

With a parliament of part-timers that only sits for four three-week sessions a year, one for each season, the December winter session in Bern is the last chance to hammer together a workable solution before the three-year February 2017 deadline.

In the latest parliamentary session in September, the 200-member National Council accepted a proposal for a watered-down version of immigration restrictions, which would prioritise the hiring of Swiss residents. One senior People’s Party member called the move “the death of direct democracy”. The smaller second chamber, the Council of States, will debate the issue in December.

The People’s Party likes to get its way and has shown itself willing to launch a second more hardline initiative on the same theme if it feels the new legislation is not faithful to the spirit of the original initiative.

Before Brexit, the European Union was a club countries aspired to join. Membership was a one-way process. Little attention was paid to the few eccentric European nations that had not been seduced by Brussels. Now these relationships are much more interesting because they provide a possible blue print for living alongside the EU as a non-member.

It is nothing new for the Swiss to be isolated. Buffeted by empires on all sides, Switzerland began its existence as a club of cantons that freely joined together to determine their own future. The decision to embrace neutrality saved countless Swiss lives and has always been a mark of independence. It allowed the Swiss to avoid the bloodshed and devastation of the two World Wars, and kept the country out of the post-war movement towards political unity in Europe. If Europe drifts towards greater fragmentation again, it is difficult to predict whether the solo approach will continue to serve the country well.

Clare O’Dea has lived in Switzerland since 2003 and is the author of The Naked Swiss: A Nation Behind 10 Myths, published by Bergli Books in October 2016.