Stephen Collins: Our independence sprang from more than violence alone 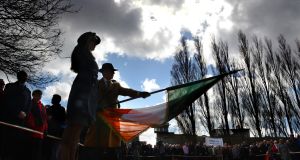 Lowering the Tricolour during the annual Easter Rising 1916 commeremoration at Arbour Hill in 2013. Photograph: Cyril Byrne

The security threat posed by the current dissident version of the IRA to the 1916 commemorations raises some uncomfortable questions about the glorification of violence to achieve political ends which is at the core of the events marking the centenary of the Rising.

There is a big difference between the courage and honour of the 1916 rebels and the murderous fanatics who dominate the new IRA but what the volunteers a century apart have in common is the belief that they are entitled to kill or be killed in the name of Ireland without any democratic mandate for their actions.

To be fair, the official centenary commemorations set out to present a far more nuanced picture of what happened in 1916 than the equivalent event half a century ago. The programme of events for this week also reflects a healthy pride in the achievements of this independent, democratic State.

Still, as the Easter 2016 has drawn nearer the emphasis on death and blood sacrifice has grown ever more dominant while the wider context in which the official programme for the decade of centenaries sought to situate the Rising has faded into the background.

It is all of a piece with the fact that even though the complexity of our history is properly taught in our schools the State has continued to foster the myth that independence only came about through violence.

This distorted version of history that traces the foundation stone of the State to the violence of 1916 has provided ideological cover for the minority in succeeding generations who have tried to destroy it.

The inherent contradiction between the values the vast majority of Irish people actually live by today and the values we applaud as admirable in the past was one of the themes in Fr Francis Shaw’s courageous challenge 50 years ago to the established view of 1916.

“It asks us to praise in others what we do not esteem or accept in ourselves,” he wrote in a famous essay “The Canon of Irish History” written for the commemorative issue of the journal Studies for 50th anniversary of the Rising in 1966 but was withheld as being too provocative. It was published in 1972. (The current issue of Studies “1916 Birth Pangs of a Nation?” takes a comprehensive look at the Rising from a variety of perspectives.)

Of course there is no denying the facts of what happened in 1916 or their importance. The problem is that the Rising has been elevated into the supreme founding event of modern Ireland when, in fact, it was one in a series of developments between 1912 and 1923 that changed the political structure of the country.

The Rising certainly led to the creation of an Irish State with considerably greater independence than that envisaged by Home Rule but it also resulted in the partition of the island and the legitimisation of violence for political ends. We are still living with the malign consequences of both today.

Taken in isolation, the Rising can indeed be interpreted as an endorsement of violent and anti-democratic action. What is so little understood in the popular version of Irish history is that with the passage of the third Home Rule Bill in 1912, Ireland was going to have its own parliament one way or another.

The armed revolt of the Ulster Volunteer Force and the outbreak of the First World War instigated the chain of events that led first to the Rising and on to the First Dail, the War of Independence and the Civil War.

The Rising transformed the political situation utterly, but what cannot be overlooked is that it was an undemocratic project of a minority within a minority and was far from a popular revolt. The destruction of Dublin, the courage of the rebel leaders and, most important, the executions that followed, turned the tide of public opinion.

For all the violence of 1916 and later years, the independence movement did not discard the democratic tradition of Irish nationalism. The fact that an independent Ireland is one of the oldest continuous parliamentary democracies in the world is a tribute to the roots planted by Daniel O’Connell, Charles Stewart Parnell and John Redmond.

All of them would surely feel at home in the Dáil chamber, even if their oratory was of a higher quality than that usually on offer in Leinster House.

By contrast, it is hard to believe that leaders of the 1916 Rising would be quite as happy with how things turned out. Modern Ireland is hardly the Gaelic-speaking, devoutly Catholic, anti-materialist nation dreamed of by Padraig Pearse. Neither is it the dictatorship of the proletariat envisaged by James Connolly.

In the past few weeks there has been some controversy about the banner on the old house of parliament building in College Green, now the Bank of Ireland, which displays the images of Gratten, O’Connell, Parnell and Redmond but there is a strong argument for saying that the our durable democratic State and its institutions owes more to them than the rebels executed in 1916.

Another important feature of Irish life distorted by the cliché of the rebels versus oppressors version of the Rising is the relationship between Ireland and the United Kingdom. After painful decades of hostility and suspicion between the two countries, stemming from the Rising and its aftermath, relations have improved dramatically in recent decades.

The two governments were brought together in response to the IRA terror campaign and co-operated closely in the painstakingly slow process that ultimately led to the Belfast Agreement.

That agreement has still to reach its full potential in bringing the two communities in Northern Ireland together but it has succeeded in putting the relationship between the Irish Republic and the United Kingdom on a firm and friendly footing appropriate to neighbouring States with so much in common.

The State visit of Queen Elizabeth to Ireland in 2011 and the reciprocal visit of President Higgins to the UK in 2014 demonstrated the warmth of the new relationship which actually reflects the genuine regard the vast majority of the Irish and British have for each other.

The final irony is that as we celebrate the actions of those who resorted to violence to break the connection with England, there is currently almost complete political unanimity across nationalist Ireland, including Sinn Fein, in the desire that the United Kingdom remain with us in the European Union just when a substantial number of the British people have come to regard that Union as the never-failing source of all their political evils.

1 Restarting Ireland: When and how will we ‘get back to normal’?
2 Coronavirus: Trump warns of ‘a lot of death’ in United States next week
3 Mary Lou McDonald: This crisis shows that Sinn Féin was right
4 Man shot dead in Belfast was suspect in Keane Mulready-Woods murder
5 Tuberculosis vaccine ‘potential game-changer’ in Covid-19 fight
Real news has value SUBSCRIBE