Stephen Collins: Corruption likely to be an election issue 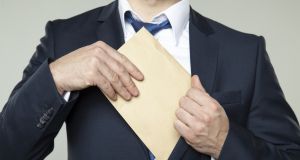 The notion that corruption is rife across the political system because of the dubious behaviour of a few needs to be challenged, not simply because it is wrong but because it has the capacity to further erode confidence in our democracy.

The episode of the three councillors has fuelled the narrative of those who like to maintain that Ireland is an irredeemably corrupt country and even a failed state.

The behaviour of three councillors out of more than 900 proves nothing of the kind. Still, the treatment of the issue has fuelled the corrosive cynicism about politics and politicians, which has become a feature of life not just in Ireland but in many western democracies.

Of course, we should be concerned about standards in public life. It is only right and proper that the behaviour of politicians and public officials is scrutinised, and that ethics legislation is updated to meet best-practice requirements.

Transparency International rates Ireland at 17th cleanest out of 175 countries in the world on its corruption perception index, just behind the UK and level with the US. There is obviously plenty of room for improvement, and we still have some way to go before we arrive at the kind of standards that characterise Scandinavian countries.

However, the notion that corruption is rife across the political system because of the dubious behaviour of a few needs to be challenged, not simply because it is wrong but because it has the capacity to further erode confidence in our democracy.

Faith in the institutions that have underpinned a long period of unprecedented peace and prosperity across Europe has been dented by the retrenchment policies necessitated by the euro zone crisis and now being tested by the flood of migration sweeping into the continent.

Last week’s decision of the voters in Denmark to opt out of EU justice legislation marked a rejection of the established parties and a further boost for the anti- immigrant populist Danish People’s Party. That could be a harbinger of things to come in the UK.

Ireland has its own home-grown populists of left and right, who will ply the voters with a variety of populist panaceas in the next couple of months. So it is vitally important that debates are conducted on the basis of fact rather than hysteria.

A level-headed analysis about minimising the possibility of corruption would be welcome, and it is equally important that the debate on the economy is also based on fact rather than wild, unsubstantiated assertions.

Since the financial crash, a variety of outlandish claims have gained currency and they need to be challenged before they become accepted as fact.

One recurring canard is the assertion that the Irish tax system is loaded in favour of the well-off. Nothing could be further from the truth. In a short but comprehensive article on the subject on Publicpolicy.ie, funded by Atlantic Philanthropies, tax expert Donal de Buitléir showed that Ireland’s tax system is one of the most progressive in the developed world.

It is not only the Irish income tax system that is among the fairest in the OECD: the same applies when all forms of tax, including VAT, excise and property tax, are taken into account.

The most unfair aspect of the Irish tax system is the excise on tobacco, which falls most heavily on poorer people who smoke the most. However, the case for taxing tobacco is a public health one that trumps fairness.

De Buitléir concludes: “Ireland has the most efficient tax and welfare system in the developed world in transferring net income from better off to poorer people.”

Any debate on taxation that ignores this central fact is meaningless. Politicians and commentators are perfectly entitled to argue that even more should be taken from the better-off and given to those at the other end of the income scale. But the reality of the current position needs to be acknowledged first.

It was instructive to hear Siptu boss Jack O’Connor, who hailed Syriza’s election victory at the beginning of the year, acknowledge on radio that the party had been forced to abandon most of its pledges once in office.

He noted that, by contrast, the Irish Labour Party, which has endured a torrent of abuse for allegedly selling out on its principles, has implemented many of the things Syriza has had to abandon. These include increasing the minimum wage, maintaining welfare payments and protecting the jobs of public servants.

In truth, all of the parties who have been in government since the crash deserve credit for the relatively fair way the burden of the adjustment has been shared. Whether voters will give it to them is another matter.

1 Luke ‘Ming’ Flanagan bares his bottom half to European Parliament
2 Do I want things to go back to normal? I’m not so sure I do
3 Gardaí investigate Dublin Black Lives Matter protest over Covid-19 rule breach
4 Normal People: Full-frontal nudity was not its most radical feature
5 Miriam Lord: Not a bare ankle, hairy knee or a Ming the Trouserless to be seen at Covid committee
Real news has value SUBSCRIBE