Paul Gillespie: A new vision for the European Union

Has EU become more a museum than a laboratory of change? 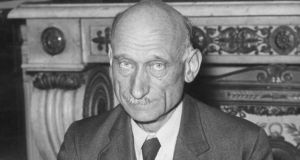 ‘Robert Schuman’s declaration 65 years ago today proposed the pooling of French and German coal and steel production so as to make any future war between them “not merely unthinkable, but materially impossible”.’ Photograph: AFP/Getty Images

‘Europe will not be made all at once, or according to a single plan. It will be built through concrete achievements which first create a de facto solidarity.”

Robert Schuman’s declaration 65 years ago today proposed the pooling of French and German coal and steel production so as to make any future war between them “not merely unthinkable, but materially impossible”. It was a bold and daring proposal, made concrete when it was signed by leaders of these two countries along with those of Italy, the Netherlands, Belgium and Luxembourg. Justifiably it is regarded as the foundation stone of European integration now institutionalised in the European Union. His memory is honoured today for that reason.

A new generation of Europeans takes peace and continental mobility for granted in a way their grandparents could not. And yet a distinguished group of Europeans, asked to help draft a new Schuman Declaration, frame their text as follows: “We are witnessing today a pervasive sense of insecurity among European citizens.”

They mention economic insecurity, concerns about eroding social protection and employment, energy supply, and changing geopolitics which brings armed conflicts to Europe’s immediate neighbourhood. Fears that the specific cultural and political identity of national societies are being threatened – rightly or wrongly – by immigration are mentioned. So are doubts about the EU itself – whether it is capable of responding effectively to these concerns and a disengagement of citizens from its work.

Signed by Giuliano Amato, a former Italian prime minister, Élisabeth Guigou, a French parliamentarian, and Vaira Vike-Freiberga, former president of Latvia, the document was launched this week at the European University Institute in Florence. Its president, Joseph Weiler, chaired a discussion that highlighted the need for a new narrative and concrete achievements capable of retransforming Europe and re-engaging citizens.

Spending priorities should be shifted from agriculture to a common urban policy for renewal of growth and employment, linked to climate change and giving mayors a prominent role. An energy union would be similarly mobilised for security in that domain.

Defence and security against external and internal military and terrorist threats can no longer be organised at national level but now requires the pooling of capabilities, intelligence and expenditures in a European defence union complementary to Nato.

This is more a first draft than a new declaration, but many of the elements are there. They should be reordered and prioritised into greater coherence and relevance, discuss ants suggested. Romano Prodi and Giorgio Napolitano, former Italian statesmen, agreed leaders lack confidence to make visionary proposals linking passion and pragmatism as Schuman did.

Danuta Hubner from the European Parliament and Kalypso Nicolaidis from Oxford University said Europe’s role in and openness to the world should be more prominent. Prodi asked whether the continent is now more a museum than a laboratory of change as it could and ought to be.

Restoring hope in a better and safer future is a huge challenge, they agreed. Asked what would be today’s equivalent of a coal and steel pact, Danilo Turk, former Slovenian president, wanted a strong statement on youth unemployment. Hubner lamented the statement by former EU council president Hermann Van Rompuy that there would be nothing big in the years to come, since it’s all step by step.

Acknowledging that, Amato argued convincingly that several of their proposals could be brought together into a potentially transformative vision. Creating a social and an urban fund, and a fiscal capacity to deal with transfers for the euro zone, requires an EU budget of 3 to 4 per cent of its GDP rather than the present 1 per cent. The challenge for political leaders is to say that clearly, so voters can be convinced it offers the hope of a better and safer future in a more sustainable way. pegillespie@gmail.com