‘It is as if the Oxbridge university elites, who dominate much of Britain’s political media have determined that Labour is not entitled to elect a leader of his views’

Jeremy Corbyn claimed he wanted to do things in 'a slightly different way' for his first Prime Minister's question time as leader of Labour. Video: Parliament TV 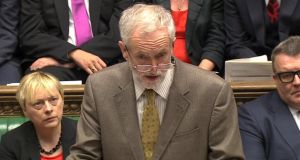 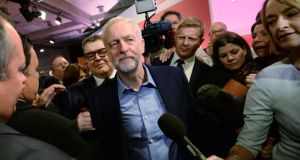 It has been fascinating to watch the first days of Jeremy Corbyn’s leadership of the British Labour Party.

His election says much about the anti-establishment and anti-austerity mood currently operating in British politics, which is similar to that reflected in the US presidential election and indeed to that apparent in opinion polls here in Ireland. The enthusiasm generated by the Corbyn leadership campaign, especially among the young, speaks volumes also of the hunger for authenticity in politics.

The relationship between Corbyn as Labour leader and the mainstream British media in these opening days has also been quite extraordinary and is worthy of study in its own right. Corbyn has not been willing or able to do political media relations in the highly-staffed and full access way most opposition political parties now do.

He is simply not prepared to engage in the long-established trade-off whereby, in order to avoid their media relations becoming the story, senior opposition politicians are required to engage with the media on the media’s terms. For his obstinacy the press has roundly punished him.

It is no surprise that Corbyn has faced trenchant hostility from the Tory and Murdoch press since they oppose the politics he espouses. This week, however, even the coverage of him on the supposed fair or left of centre media has been over the top. Frankly, some of it has been disgraceful and undemocratic. It is as if the Oxbridge university elites, who dominate much of Britain’s political media, as they do much of Britain’s establishment politics, have determined that Labour is not entitled to elect a leader of his views.

Rather than adjusting to cover new politics of the type Corbyn has been mandated to practise, the media have turned Corbyn’s refusal to do media relations the old way into a failing on his part.

The media have wilfully been contributing to the Conservative characterisation of Corbyn as a likeable but extremist incompetent. Even the coverage on the BBC has fed into to this in some subtle and some not so subtle ways. BBC reports for example have taken to regularly describing Corbyn as the “left-wing leader of the Labour Party” leading to a series of entertaining online petitions for them to describe David Cameron as the “right-wing leader of the Conservatives”. The second item on BBC’s Newsnight two nights this week focused on whether Corbyn’s media style was undermining his efforts at new politics.

On Sunday evening, Corbyn, having chosen not to travel by chauffeur-driven car, was, when walking up the street, approached by a press posse and he dared to refuse to comply with the media’s presumed entitlement to a comment. When the cameras insisted on continuing to follow him Corbyn walked on in silence for as long as they continued to film him. The media then decided that this made him, rather than them, look rude.

At the Trade Union Congress on Tuesday, Corbyn delivered a speech which was very different in content from those delivered by Tony Blair, Gordon Brown or Ed Miliband at previous such events. Much of the subsequent media focus was on Corbyn’s style of delivery. It was wrong of him, the media pundits decided, not to use the autocue.

On Tuesday the media pounced on what they decided was the grave mortal sin of failing to sing along to the national anthem at a memorial service. This story dominated many of Wednesday’s front pages. It even led a serious journalist like Jon Snow in an interview to ask Corbyn the absurd question of whether he loved his country.

Although he has no experience of the parliamentary frontline, Corbyn’s approach of asking Cameron at Prime Minister’s Question Time real questions from real people about the issues most affecting their lives meant that he controlled both the format and content of exchange.

Labour has certainly taken a risk in selecting Corbyn, but they have done so in a very democratic way. He is entitled to a fair hearing.