Niall Holohan: Election of 20 women in Saudi Arabia is not meaningless

One must recognise the value of the steps now being taken in Saudi Arabia to modernise the social and political aspects of Saudi society, no matter how slowly these may be taking place 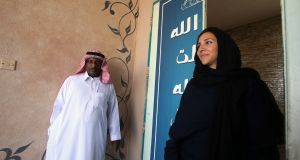 A man who is the guard of the school watches Saudi women arrive at a polling station to vote for the municipal elections on December 12, 2015 in Jeddah, Saudi Arabia. Photo by Jordan Pix/ Getty Images

The people of Saudi Arabia took an important, if faltering, step towards democracy on December 12th when elections for municipal councils throughout the country took place. For the first time, women could not only vote but were also able to stand as candidates.

As with similar elections which took place in 2005 and 2011, the results have been less than earth-shattering. Approximately 10 million Saudi citizens were eligible to vote in the elections but only 1.35 million men and 130,000 women actually bothered to register.

The low number of women registered can be partially explained by the fact that many Saudi women do not even possess personal identity cards. Overall, 6,917 candidates (of whom 979 were women) stood for 2,106 seats in 284 councils across the kingdom. In addition, a further 1,053 seats (ie one-third) are to be filled directly by government appointment in the coming weeks.

By Western standards, some of the electioneering regulations can only be described as strange and amusing. In particular, no photographs of any of the candidates could be displayed. Initially the rule had applied only to female candidates but – after claims that this amounted to gender discrimination – all candidates were subject to the prohibition. The same ruling applied to appearances in any newspaper or broadcasting media.

In the absence of adequate resources to interview all 6,917 candidates, the authorities decided that no interviews at all would be allowed. The candidates were accordingly reduced to launching their campaigns on social networking sites. Even the number of WhatsApp or text messages sent by candidates, however, was subject to limitations in order to avoid “harassment” of the voters.

As in the previous two municipal elections, it is to be expected that many of those elected will have Islamist tendencies, reflecting the traditionalist and extreme elements existing in Saudi society. This is believed by many to be one of the reasons why the local councils elected in the past have to date been given little power by the authorities, even in the management of their local civic responsibilities. It remains to be seen if the newly elected councils will suffer the fate of their predecessors.

While it would be foolish to suggest that this putative exercise in people’s power has turned Saudi Arabia into a democratic society, it would also be wrong to reject it as insubstantial and meaningless. Given the current political situation in most of the Arab world, it can be argued that stability and prosperity in the Arabian peninsula is essential if the Middle East as a whole is not to descend into further social turmoil.

One only has to look at recent electoral and other developments in such countries as Egypt, Libya, Iraq and Syria to realise that the default position in many Arab countries is Islamism in one form or another. This has led inevitably to extremism and anti-democratic behaviour wherever the popular will has been unleashed in an uncontrolled fashion.

One must recognise therefore the value of the steps now being taken in Saudi Arabia to modernise the social and political aspects of Saudi society, no matter how slowly. The recent municipal elections are a small but important part of this progressive process. A further important step would be the introduction of democratic elections for the Shoura Council (parliament), he main body advising the king on all matters of national importance. It is greatly to be hoped that such a development will take place before too long.