Jean-Claude Juncker: Asylum standards are in EU law, but are they in our hearts? 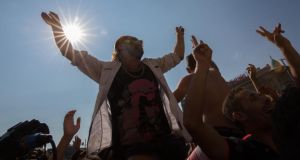 Migrants protest outside Keleti station in central Budapest after it was closed to them on September 1st, 2015. Photograph: Matt Cardy/Getty Images

Europe for me is and always has been a community of values. This is something of which we should be proud. We have the highest asylum standards in the world, which are inscribed in our laws and our treaties. I am, however, worried that they are increasingly absent from our hearts.

When we talk about migration we are talking about people. People like you or me, except they are not like you or me because they did not have the good fortune to be born in one of the richest and most stable regions of the world. We are talking about people who have had to flee from war in Syria, the ISIS terror in Libya and dictatorship in Eritrea.

It worries me to see the resentment, the rejection, the fear directed against these people by some parts of the population. Setting fire to refugee camps, pushing back boats from piers, physical violence inflicted upon asylum seekers or turning a blind eye to poor and helpless people: that is not Europe.

It also worries me to hear politicians from left to right fanning a populism that brings only anger and not solutions. Hate speech and rash statements that threaten one of our very greatest achievements – freedom of movement across the continent: that is not Europe.

Of course, there is no simple answer to the challenges posed by migration. What is clear is that no European Union member state can effectively address migration alone. We need a strong and collective European approach. And we need it now.

In May, we also proposed a relocation mechanism to help member states by relocating a small portion of the many people in need of international protection arriving in Italy and Greece. The commission proposed relocating 40,000 to other EU member states – national governments were prepared to accept just over 32 000. We want to go much further, establishing a permanent mechanism that could be automatically triggered in emergency situations – for whichever EU member state needs it. When we have common external borders (notwithstanding Schengen), we cannot leave front-line member states alone. We have to show solidarity in our migration policy.

Some of the measures proposed by the commission have already found support. The others now urgently need to be taken up by the EU’s 28 member states – even those who have until now remained reluctant to do so. The dramatic events of the summer have shown that we must act now and put this common European asylum and refugee policy into practice.

We do not need another extraordinary summit of heads of state and government. We have had many summits and will meet again in November. What we need now is for all EU member states to adopt the European measures and implement them.

What we need, and what we are sadly still lacking, is the collective courage to follow through on our commitments, when they are not easy or popular.

Instead we have finger-pointing – a tired blame game which might win publicity, maybe even votes, but which is not actually addressing the problem. Europe fails when fear prevails.

Europe succeeds when we work together, pragmatically and efficiently, to meet the challenges we face. We are a resilient continent, able to unite in face of that which seeks to divide us. Now is the time to show collective courage to meet the migration challenge.

Jean-Claude Juncker is president of the European Commission