International anthem – An Irishman’s Diary about ‘The Marseillaise’ 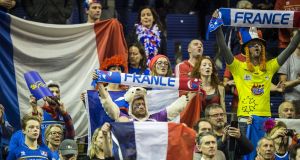 Critics of Ireland’s Call can rest assured that there will be at least one inspiring song sung before the rugby in Paris today. And if the opinions of the great Mike Gibson are anything to go by, one may be enough.

In a fascinating interview with Paul Kimmage recently, Gibson expanded on comments he’d made previously in this newspaper, about playing for Ireland in Cardiff. On such occasions, he recalled, you never needed a team-talk beforehand: “You just had to listen to the Welsh national anthem and tears would come into your eyes”.

Even as a mere supporter, I know what he means. As a piece of music, Wales’s is my favourite of all the Six Nations anthems, narrowly ahead of La Marseillaise (which Gibson also found inspiring). This is despite – or maybe because of – my not knowing what the words mean.

They could be extolling the beauty of sheep, for all I know. I’m sure I’ve looked them up several times, and found them instantly forgettable, as anthem lyrics usually are. But it doesn’t matter, because the power is in the music, which lifts you whether you’re Welsh or not.

Maybe this explains Ireland’s extraordinarily good record in Cardiff. As a music-loving people, we must be inspired by their anthem, sung as only 60,000 Welsh people can sing it. It’s not as powerful in Dublin, obviously, where their choir is so much smaller.

Just as interestingly, from a Belfast Protestant, Gibson said he could derive similar power from The Soldiers’ Song. He called it “stirring” and added: “It’s not unlike the Marseillaise. I know it’s criticised for its violence but it was a song that was created to try to stir the troops.”

Actually, violence-wise, Amhrán na bhFiann is hardly in the same class as La Marseillaise, the ferocity of which makes its lyrics unusually memorable for an anthem.

It starts, in the jauntiest part of the air, with a general rallying cry against “tyranny’s bloody banner”. Then, in a musically hushed section, it evokes fear, inviting citizens to listen to the approach of the enemy, “coming […] to cut the throats of your sons, your women!”

At that point, turning martial again for the chorus, it urges men “to arms”. And after that, in a flourish perhaps influenced by the fact that France is an agricultural country, it predicts cheerfully that the invaders’ impure blood will soon “irrigate our fields”.

Being squeamish, I try not to think about all that when humming along with it, as Irish people tend to do. I just enjoy the musical drama. And I can imagine that any troop-stirring effects it has for the home team can be easily replicated by visitors.

Certainly, on Ireland’s recent visits to Paris, in both soccer and rugby, the anthem has not had a notably cowing effect. Back in 2004, I was one about 40,000 Irish football fans who sang along with it (mostly with “la-la-la” apart for “Aux armes, citoyens!”) before Brian Kerr’s team drew 0-0.

There was something similar in 2009, (the game in which Thierry Henry took the call to arms too literally), when we morally hammered the hosts 1-1. And in rugby too, it’s been a while since Irish teams of supporters, visiting Paris, had cause to feel the words of La Marseillaise turned against them.

Whether anthems have any effect that outlasts their playing is, anyway, highly debatable.

In the same interview, Gibson spoke of the importance of drawing back from pre-match emotions, since he always knew he might have to make big decisions in the opening seconds of a game and needed a cool head.

And it’s noticeable that some of the most successful rugby countries have the least inspiring anthems. Advance Australia Fair is the musical and lyrical equivalent of weak tea. As for New Zealand’s, I hardly remember ever hearing it before games, so overshadowed is it by the Haka.

I’m reminded of a quotation attributed to Thomas Jefferson, during the revolution that produced La Marseillaise: “Every man has two countries – his own and France”. He might have said something similar about anthems.