Inside Politics: Kenny promises half his next Cabinet will be women – can he keep it?

The Coalition has been criticised for breaking its reform promises, but it has implemented reforms, such as the requirement for gender balance in the next election 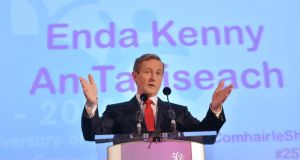 ‘An important reform which has already changed the way the Dáil does its business has received little or no attention. Pre-legislative scrutiny now allows the members of Oireachtas committees to make an input into legislation before it is framed.’ above, Taoiseach Enda Kenny. Photograph: Alan Betson / The Irish Times

Enda Kenny’s announcement that half his Cabinet will be women if he is returned to power after the next election is clearly designed to regain some credibility on the issue of political reform, as well as attempting to appeal to women voters.

The Coalition has been widely criticised for failing to live up to the promise of reform, which was one of the key elements of the appeal of both parties to the electorate in 2011.

Political reform has taken a back seat for a number of reasons. One is that the overriding imperative of getting the economy back on the rails took precedence over everything else. Then the rejection by the electorate of two key elements of the Coalition reform plan – greater powers of investigation for Dáil committees and the abolition of the Seanad – was a slap in the face that reduced the appetite for serious reform.

Another problem is that the Government has received little or no credit from the public or the media for the reforms it has actually implemented. That has fuelled the belief among some experienced politicians that there are no votes in political reform, but plenty of grief.

It would be unfair, though, to overlook the fact that some important reforms have been implemented. The requirement on political parties that one-third of candidates at the next election should be women is one that over time that has the capacity to profoundly change the way politics is conducted in Ireland.

Severe financial penalties will apply to parties which don’t meet the target, so they are all taking it very seriously. It has created a serious problem of electoral strategy for the two Government parties as they are both certain to lose seats .

Retaining seats The best way of holding on to seats when the tide is going out for a party is to run a minimum number of candidates in the hope of retaining existing seats. All over the country Fine Gael and Labour will have to add on women candidates who may have little chance of being elected but who could damage the chances of sitting TDs.

Opposition parties, which can expect to gain seats, will be in a more favourable position to get women candidates elected, and over time the one-third requirement will inevitably increase the number of women in politics.

Just 25 women were elected in 2011, and while that was the highest number ever, it was only a marginal increase on the previous few elections. It means that women account for just 15 per cent of the current Dáil membership.

Enda Kenny’s commitment to introduce a 50:50 gender balance at Cabinet has taken the matter a step further, even though some of his male TDs are not very happy about it.

Another important reform which has already changed the way the Dáil does its business has received little or no attention. Pre-legislative scrutiny now allows the members of Oireachtas committees to make an input into legislation before it is framed.

They are also able to hear from special interest groups and individuals with the required expertise who have an interest in the legislation under review.

Before this, Bills produced by Government were regarded as holy writ and most amendments put forward by Opposition parties were resisted fiercely as a matter of political honour.

More than 30 pieces of legislation have passed through this new process, which has increased public and political oversight in the framing of legislation. Seven committees have engaged in nearly 60 individual hearings involving over 360 organisations or representatives appearing before them.

Fine Gael TD David Stanton, the chair of the Justice Committee, who has enthusiastically operated the new system, says it has dramatically reduced the level of political posturing involved in the legislative process.

“It’s almost apolitical. We deal with what people say; we engage with the people and you have to, so it’s been very constructive. Pre-legislative scrutiny is a big change.”

The problem for TDs, though, is that the process generates no publicity. Serious, hardworking deputies like Stanton and Labour’s Michael Conaghan get no credit for their input while colleagues who engage in political play-acting on the floor of the Dáil get loads of airtime and acres of print coverage.

One of the problems about the Irish political system is that while the actions and statements of Government are usually subject to intense scrutiny both in the Dáil and the media, Opposition parties and Independents are subject to no constraints about the positions they adopt and the promises they make.

Populist slogans Ill-thought-out policies, often amounting to little more than populist slogans, produced by the Opposition in response to Government decisions are given equal weight in the media coverage of politics.

This is not just a feature of the current Dáil; it is the way the political system has operated for decades and it is one of the reasons why voters have become so cynical about politics.

Much of the response by the current parties of government to the financial crisis during the last Dáil was every bit as irresponsible as the things being said now from the Opposition benches. The creation of false expectations by our politicians about what can or cannot be achieved by government has fuelled the boom and bust cycle which has bedevilled the country.Political reform on its own won’t change that, but the system of pre-legislative scrutiny points up how some TDs are prepared to get involved in serious work when the political structures enable them to do so.