Greece faces the cold stare of its creditor countries 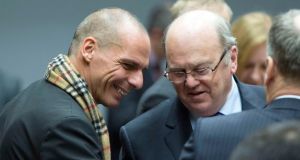 Greek premier Alexis Tsipras started the week with a claim for reparations from Germany over the second World War as he campaigned to assert control over his country’s crippled finances. His administration ended the week in bailout talks with the European Commission, the European Central Bank and the International Monetary Fund, the very troika bodies he had promised to banish forever from Athens.

After the euphoria of their election three weeks ago and a relentless rhetorical drive to restore Greek pride, Tsipras and his ministers faced the cold stares of their international creditors in Brussels as they sought to plot a way out of the deepening fiscal mire. Far from winning other countries over to the notion of swingeing debt writedowns and other reliefs, they ran into a wall of resistance.

“There was a sympathetic tone, but it wasn’t backed up by sympathetic content,” said a senior euro zone figure who was party to the talks.

Given the gulf between Athens and its sponsors, the mood in Brussels is pessimistic. Greek banks are already in danger of running out of money, so political meetings next Monday and Tuesday are pivotal. An orderly salve is urgently needed. That the quest to buy time is a high stakes affair is obvious, but this is to say nothing of the ever-deep divisions over the long-term outlook for Greece and its membership of the single currency.

At issue right now is a plan embracing a revision of some policy elements in the programme; a possible reduction in the budget surplus Greece is required to achieve before debt servicing costs; a renewed effort to boost tax collection and stamp out corruption; and the possible extension in the maturity of bailout loans. The troika, detested in Greece, might yet be renamed, but that is cosmetic. Whether Tsipras signs up for such a plan and can see it through in the cauldron of Greek politics remains to be seen.

In Brussels on Thursday, Taoiseach Enda Kenny had no comment on the question of whether the Greek leader overpromised in his election campaign. Notably absent from the current proposals are debt writedowns, a core element of the Tsipras agenda. At the present reading, it’s not going to happen. Other euro zone countries, which are on the hook for any Greek default, have been insisting the total stock of debt is not a problem and the flow of repayments is under control.

The dimensions of the challenge facing Tsipras became clear last Wednesday night when his close lieutenants – finance minister Yanis Varoufakis and deputy premier Giannis Dragasakis – attended an emergency meeting of euro zone finance ministers in the Belgian capital. Although the latest phase of the Greek saga has been cast as a one-to-one face-off with Germany, ministers from all other euro zone countries were unanimous in their rejection of any debt “haircut”.

With no little aplomb, Varoufakis addressed the meeting with a broad dissertation on his country’s abundant humanitarian and budgetary problems. That was as far as he got, however. To the immediate left of the Greek representatives sat Minister for Finance Michael Noonan, who rejects any writedown and who had publicly bemoaned the lack of a concrete plan on his way into the meeting. On the other side of the table was the Slovak minister Peter Kazimír, who opened the wider discussion by saying divisions over the rescue of Greece had cost his party an election earlier in the debacle. Kazimír, who is also deputy premier, said he had no intention of losing another election by accepting write downs on loans to Athens.

Ministers from some of the Baltic countries joined in to say they had borrowed at high cost to source their contributions to the Greek rescue, adding Athens was paying a lower rate of interest on the bailout than they paid in private markets. Portugal’s minister, Maria Luís Albuquerque, said her country was paying more as a proportion of economic output to service its national debt than Greece. Spain’s minister, Luis de Guindos, cited 25 per cent unemployment in his country, adding that its €26 billion contribution to the Greek rescue was equivalent to its welfare budget. As the hard talk continued, ECB chief Mario Draghi intervened to highlight the perilous position of the commercial banks in Greece.

It was only with the continuation of the current EU-IMF programme, which expires on February 28th, that the ECB would restore crucial bank support to Greece. This, however, was anathema to the Greeks, who had spent the days since their election proclaiming the end of the bailout. Varoufakis wanted “bridging” finance, the aim being to help Greece overcome a looming funding crunch without strict policy oversight, but this was rejected. The meeting then settled on a push to develop a formula of words acceptable to all ministers with which they would initiate talks on some kind a prolongation of the programme. At issue were semantics. The discussion centred on the deployment of words such as “extended” or “amended” in respect of the programme.

Although Varoufakis gave tentative approval to one formulation, this was withdrawn at the last moment after calls he and Dragasakis made to Athens.

German minister Wolfgang Schäuble had already left for Berlin. As the talks ended in stalemate, participants noted privately that the direction issued from Athens had severely undermined Varoufakis’s authority. He appeared deflated, said one observer.

The upshot of it all was that no engagement with Greece was in prospect before the Monday meeting. This served only to ratchet up the pressure as swift agreement is required. Greek banks are losing deposits, tax revenues have dropped hugely and parliamentary votes are required in Finland, Germany, the Netherlands and Estonia to change the terms of the current programme.

This was the situation when Tsipras arrived in Brussels on Thursday for his first summit with other EU leaders. He went first into a meeting with Jeroen Dijsselbloem, chairman of the euro zone ministers, and sanctioned talks with the commission, the ECB and the IMF. It was quite the climbdown, although Tsipras was still insisting hours later that “the troika no longer exists”.

The summit itself was late to start, as leaders awaited the return of German chancellor Angela Merkel and French president François Hollande from all- night talks in Minsk on the Ukraine conflict. Tsipras gave an “eloquent but general” speech to the gathering in which he emphasised the necessity of respect for democracy and respect for contracts. Where contract obligations could not be met, however, the options were to restructure the terms or break them.

But there was scant enthusiasm in the leaders’ chamber for any deep debate on the substance of the problem. There were some encouraging words about the relevance of the Irish reformist exemplar for Greece, and suggestions too that it was always open to Tsipras to divert military expenditure to social welfare. Lithuanian president Dalia Grybauskaite said the minimum wage in her country, which joined the euro only last month, was lower than in Greece.