Fintan O’Toole: Pro-life campaign needs to get its facts straight 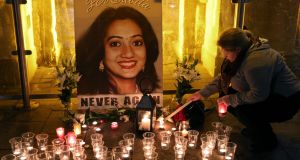 Candles are lit at the vigil at Eyre Square in Galway to mark the first anniversary of the death of Savita Halappanavar. Photograph: Joe O’Shaughnessy.

If the establishment of a citizens’ assembly on abortion is to spark an honest and open debate, perhaps anti-abortion campaigners might stop basing their case on a wild untruth.

On Thursday’s Morning Ireland, Cora Sherlock, spokeswoman for the so-called Pro-Life Campaign, told Audrey Carville that “Ireland had a phenomenal record in protecting women’s health and protecting maternal health right up to 2013, when abortion was introduced into this country very tragically”.

This is a classic exercise in truthiness. Anti-abortion activists want it to be true that Ireland’s maternity services, free from the stain of abortion, have had an outstanding record of protecting the lives of pregnant women.

Therefore it must be true. Why bother with the minor detail that it is based on figures that have long since been shown to be ludicrous?

Why worry that it glosses blithely over the deaths of real women such as Tania McCabe, Bimbo Onanuga, Dhara Kivlehan, Savita Halappanavar, Jennifer Crean and Sally Rowlette?

Ireland’s “phenomenal” record in protecting maternal health is what Norman Mailer called a factoid: a fragment of pseudo-information repeated so often that it gets taken as fact.

It is repeated because, if it were true, it would be the best argument against legalised abortion that has ever been made anywhere.

It presents a startling correlation: Ireland has the most restrictive abortion laws in the democratic world and is also by far the safest place in the world to have a baby.

This correlation is so stark as to be almost coercively persuasive. Or it would be if it had a scintilla of truth clinging to its shameless hide.

This claim goes back to a 2007 World Health Organisation report. It was, from an Irish point of view, sensational. (Or to use Cora Sherlock’s word, phenomenal.)

It showed maternal mortality rates – deaths per 100,000 live births – to be a horrific 900 in sub-Saharan Africa, 130 in Latin America, 50 in east Asia, and nine in the rich countries of the developed world.

And Ireland? The rate, allegedly, was one per 100,000. This figure was so completely out of line with any comparable country that it could only be explained by some kind of magic.

Savita Halappanavar, for example, would be recorded merely as having died of septicaemia. So no one with any knowledge of the field ever believed this figures to be accurate.

But that did not stop the viral spread of the factoid that Ireland was the safest place in the world in which to give birth.

Anti-abortion campaigners loved it because they could claim it proved that banning abortion saved mothers’ lives.

And governing politicians loved it because they could claim that austerity-related cutbacks in maternity services did not put women at risk.

As late as 2014, Enda Kenny was deflecting concerns about some appalling maternal deaths by claiming that Ireland is “one of the safest places on the planet” to have a baby.

The factoid wasn’t just untruthful – it was actively dangerous, encouraging a deep smugness about the real threats to women’s health.

What it tells us is that the figure of one death per 100,000 is exactly as ludicrous as it looks. The real figure fluctuates between nine and 10 per 100,000.

The alleged correlation between Ireland’s draconian restrictions on abortion and the “safest place on the planet” to have a baby is blatant nonsense.

Yet they continue to peddle the line that, as the website of the so-called Pro-Life Campaign still claims, the “latest research” shows “Ireland remains at the top when it comes to safety for pregnant women.

“In other words, women are safer in Ireland when pregnant than in countries like Britain and Holland, which allow abortion on demand.”

There now seems to be a new twist to this untruth. If the real figures show that these claims are bogus, that’s only because Ireland’s ban on abortion was very slightly relaxed in 2013.

The vampiric factoid must never die, even if real women do.