World leaders are waking up to Britain leaving the EU. Video: Reuters 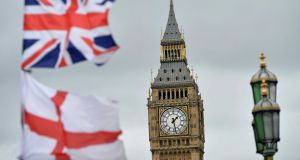 The English nationalism that fueled this week’s revolution was not explicitly on the table — it was cloaked in talk of Britain and the UK.

The English always prided themselves on not doing revolutions.

Their last one, in 1688, was, for them, a curiously polite affair: the blood flowed at Aughrim and the Boyne, but not in East Anglia or Bristol.

The self-image of English conservatives is one of slow, careful, moderate change. And now, ironically, the very people who claim to revere this heritage have staged a sudden, reckless, leap-in-the-dark coup. The country that prides itself on sober moderation has made one of the most impulsive moves ever undertaken in a developed democracy. The stiff upper lips have parted and released a wild and inarticulate cry of rage and triumph.

Make no mistake: this is an English nationalist revolution.

At its heart are all of the things the English used to see as the province of other, less rational, nations: identity, difference, the deep passions of belonging and resentment. It did not, in the end, matter that no one on the Brexit side could articulate a coherent economic case for leaving the EU. It did not even matter that those who will take over from David Cameron will be right-wing market fundamentalists whose policies will deepen the very inequalities and alienation that have driven working class voters towards Leave. It did not even matter that the very entity in whose name independence is being claimed — the United Kingdom — is surely doomed by Brexit.

What mattered was what always matters in nationalist revolutions: the appeal of Us against Them.

It helped the Leave campaign enormously that Them is both tangible and abstract, both very near and quite far away.

It is, on the one hand, the visible faces of large numbers of immigrants and, on the other, the faceless bureaucracy in Brussels. These were perfect targets for resentment, not least because they can’t answer back. Immigrants and bureaucrats were not on anybody’s campaigning platform. It was easy to turn them into sinister forces bent on crowding the English out of their own homeland and binding them in chains of red tape.

And it helped, too, that the European Union really is in a terrible state, that the passing of the generation of European leaders who experienced the second World War has left a vacuum where visionary leadership ought to be. Painting the EU as a failed project is grossly simplistic, but there is enough truth in this crude portrait for people to recognise the likeness.

It helped, finally and most ironically of all, that the same Conservative Party whose internal disputes created this historic moment, is governing with the very limited legitimacy that 35 per cent of the vote confers. Britain’s unreformed first-past-the-post electoral system has left huge parts of the population feeling democratically irrelevant and unrepresented. However much one might be repelled by Ukip, it is obvious that when four million people vote for party and it gets just a single MP, Westminster itself becomes Them for many voters.

But if the Them side of the nationalist equation is strong, the Us side is dangerously weak.

This is a revolution that has scarcely spoken its own name. The English nationalism that fueled it was not explicitly on the table — it was cloaked in talk of Britain and the UK, as if those historically-constructed entities would be unshaken by the earthquake of Brexit. The English have no modern experience of national independence and the referendum campaign articulated no vision of what an independent England will actually look like.

The key word in the pro-Brexit rhetoric was “back” – take back control; take back our country. Insofar as there is any vision behind the revolution, it is nostalgic. There is the illusion that England will now go back to the way it used to be — a vigorous world power with a secure sense of its own identity that stands defiantly alone.

It’s a used-to-be that arguably never was and that certainly is not going to be restored.

In looking for security and stability, the English have launched themselves into one of the most unstable and uncertain periods in their modern history.