Eamonn McCann: What are a few beheadings amongst friends? 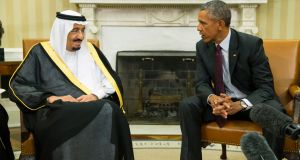 The atrocity in Paris on November 13th blew away some of the gloom which had settled on a number of major companies.

In the first 30 minutes of trading after the New York Stock Exchange opened three days later, shares in the five biggest US arms manufacturers jumped: Lockheed Martin by 3.5 per cent, Raytheon by 4.1 per cent, Northrop Grumman by 4.4 per cent, General Dynamics by 1.9 per cent and Boeing by 1.3 per cent.

Hardly dramatic but, coming after three years of decline, enough to put a smile back on stockholders’ faces.

The winding-down of US military operations in Afghanistan and Iraq and defence spending cutbacks in cash-strapped western economies had depressed demand. Post-Paris, brighter prospects beckoned.

Financial services group Stifle told clients: “We view the most likely outcome as increased political support for defence spending and for national security/terrorism to become a greater focus of the 2016 election-cycle dialogue, which is likely to create positive headlines for defence companies.”

Seen in this perspective, the aftermath of the beheading of the Shia cleric Nimr al-Nimr and 46 others by Saudi Arabia can seem part of a positive trend.

Many may be worried sick about the possibility of war between Saudi Arabia and Iran spiralling outwards to engulf the region, or feel dismayed that notions of human rights appear to have been discarded on all sides.

But in the counting houses of capitalism, market conditions matter more. The rattling of sabres rings up higher sales.

Protecting the Saudi elite from scrutiny or sanction has been an economic and therefore a political imperative for western leaders for half a century.

The most egregious example concerns the Bush administration’s role in spiriting more than 100 prominent Saudis, including at least 30 members of the extended bin Laden family, out of the US in the immediate aftermath of the 9/11 massacre.

Private jets authorised by the White House zipped hither and thither to pick up groups of Saudis from 10 regional airports.

Bush’s security chief, Richard Clark, would tell Vanity Fair the FBI had given each a clean bill of health.

But the bureau’s former head of counterterrorism, Dale Watson, told the magazine the departing Saudis “were not subject to serious interviews or interrogations”.

During the Arab Spring, in February 2011, 200,000 Bahrainis occupied the Pearl Roundabout in the capital, Manama. Posters proclaimed them as Sunnis and Shias standing together.

Saudi King Abdullah wasn’t going to have that sort of thing. Tanks rolled across the border. About 40 demonstrators were killed. Thousands were thrown into prison. The democracy movement was crushed.

No resolution to the UN Security Council resulted. Bahrainis yearning for dignity counted for nothing compared to a dictatorship exporting terrorism for years.

US secretary of state John Kerry said: “The US has lost a friend. The world has lost a revered leader.”

In Geneva in September, the UN Human Rights Council heard testimony of the results of Saudi-led bombing in Yemen.

Tank, artillery and air attacks had created what the UN described as “one of the world’s worst humanitarian disasters”.

Thousands perished. Eighty per cent of the country’s 25 million people were “on the brink of famine”.

Kerry gave reassurance: “We are determined that our Gulf friends will have the political and military support that they need.”

It was reported the following day the Pentagon was finalising a billion-dollar deal to supply the Saudis with weapons for use against Islamic State and “the Houthi rebel movement in Yemen”.

After all, among friends, what matter a bit of beheading?

1 Late Late Toy Show duet with musical hero ‘absolutely mad’ says delighted teen
2 Ireland’s teenage pariahs: ‘We are really at breaking point now’
3 Michael J Fox: ‘In the wheelchair, I’m luggage. No one listens to luggage’
4 Waterford turn Kilkenny upside down and inside out
5 Basic income for all: Has the Covid crisis given us a new economic model?
Real news has value SUBSCRIBE