Eamonn McCann: Role of Catholic Church in Easter Rising should be remembered 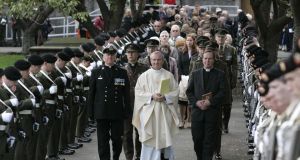 ‘In the minds of many who took part in the Rising, the fight was for faith as well as fatherland.’ above, Most Rev Dr Donal McKeown, then Bishop of Down and Connor, led relatives of the participants of the 1916 Rising, between a guard of honour formed by members of the Eastern Brigade, at the 1916 Commemoration Ceremony, at Arbour Hill, Dublin in 2005. Photographer: Dara Mac Dónaill

There has been little mention in discussion of next year’s 1916 centenary of the role of the Catholic Church in the Easter Rising and in the shaping of the State which was to emerge just six years later. This should be put right. There is a case for a separate strand on the church.

It is a curious fact about Ireland that a violent uprising against imperialism brought about by forces including avowed Marxists and others who saw themselves as abreast of radical thinking across the world gave rise in short order to an ultra-conservative confessional State.

The power of the church did not come about through ideological struggle over the content of the new state. Belief in social as well as political transformation was not entwined with anti-clericalism, as in the Catholic countries of southern Europe. The state born from the Rising was a cradle Catholic.

Oppression of Catholics since the Penal days meant that freedom to be Catholic had become an important component of the idea of national freedom. History had built in a role for religion. Wolfe Tone believed that one of the “great ends” of the fight against England lay in “the emancipation of mankind from the yoke of religion and political superstition”. He regretted that Bonaparte had missed a chance to “destroy forever the papal tyranny”.

The rosary was regularly recited in the GPO. If only for the sake of completeness, this, too, should be depicted next year in tableaux and other representations of the seminal event in the creation of an independent Irish state. It would likewise be relevant to highlight the dispatch of papal count George Plunkett to Rome a fortnight before the Rising to seek the blessing of Benedict XV on the enterprise, an act which would have driven Tone to despair.

It is said that “the bishops condemned the Rising”. This is at best an exaggeration, repeated today in efforts to project the Rising as a secular event. In fact, there were 31 Catholic bishops in Ireland in 1916, of whom only seven explicitly condemned the rebels. Most of the rest kept cannily quiet, before placing themselves soon at the head of the national movement which was to arise from the Dublin rubble.

Their presence was to make Republicanism safe for the mass of the people to embrace, while serving to suffocate the dangerous radicalism also generated by the Rising.

Ten per cent of the delegates to the first Sinn Féin convention after the Rising, in April 1917, were priests. A few months later, Fr Michael Flanagan was elected vice-president of the party. Two other priests were voted on to the executive.

The death of Thomas Ashe on hunger strike in September 1917 and the clergy’s takeover of the countrywide mourning was significant for consolidating the church’s ascendancy. Ashe’s funeral procession through Dublin was led by a detachment of armed volunteers. Behind them came 150 priests walking in solemn formation in their vestments, with Bishop Fogarty of Killaloe front and centre and Dublin archbishop Dr William Walsh following on in a motor car.

Condemnation of republican “excesses” in the War of Independence reflected the church’s determination to keep hold of moral authority over the independence movement. This was expressed, too, in simultaneously more passionate condemnation of heinous behaviour by the British – “which for murdering the innocent . . . has a parallel only in the horrors of Turkish atrocities or in the outrages of the Red Army of Bolshevist Russia” said the hierarchy in a formal statement from Maynooth.

The Anglo-Irish Treaty of 1921 partitioning the island handed the bishops a State in which their ideological mastery was already established. Hence some of the horrors inflicted on the most vulnerable of the population in the half century which followed. There were no protest marches against church rule. They wouldn’t have been allowed.

If the intention behind next year’s commemoration is to trace the way the Rising shaped the country we live in, a prominent place must be accorded to the Catholic bishops. It would be historically appropriate if they were to step forward now and demand their due.