Diarmaid Ferriter: Do under-35s have what it takes to be president of Ireland? 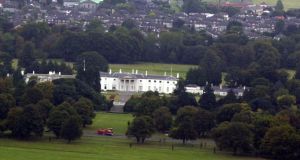 ‘Eamon de Valera referred to the Irish president’s role and powers as requiring “the exercise of a wise discretion”. Surely this is still relevant?’ Above, Áras an Uachtaráin, home of the President in the Phoenix Park. Photograph: Bryan O’Brien

It is unlikely that the referendum to be held in May on reducing the age of eligibility for election to the office of Irish president from 35 to 21 will stimulate as much heat as the issue of marriage equality, but it will still generate some mixed and strong opinions.

As a foretaste, the vote on this issue at the Convention on the Constitution was very tight: 50 per cent were in favour of change and 47 per cent against, with don’t-knows at 3 per cent. It could be legitimately argued, however, that this issue is hardly worthy of priority given some of the other, weightier recommendations from the convention requiring a referendum.

These have either been put on the long finger or are still awaiting a response from the Government, including reducing the voting age to 16, gender equality, citizen initiatives for the influencing of parliamentary business and the calling of referendums, the diaspora getting a vote in presidential elections, and removing the offence of blasphemy from the Constitution (see constitution.ie).

One of the arguments aired over the years in relation to changing the age of eligibility is that anyone who is entitled to vote in an election should also be entitled to stand in that election, a point made by a number of TDs when this question was debated in the Dáil in 2011. But the coming referendum is not going so far as to consider the possibility of an 18-year-old president.

In 2011, the US National Institute of Mental Health, the largest scientific organisation in the world specialising in this area, highlighted “striking changes taking place during the teen years. These findings have altered long-held assumptions about the timing of brain maturation. In key ways, the brain doesn’t look like that of an adult until the early 20s.”

As things stand, local election candidates can be aged 18, but in Dáil, Seanad and European Parliament elections, candidates need to be at least 21, while candidates for the presidency must be 35 or more. As in other countries, this suggests different offices are seen as requiring different levels of maturity. In the US, for example, candidates for the presidency and vice-presidency have tobe at least 35; to be a senator, they have to be 30 or more, and to be elected to the House of Representatives, they must have reached 25. Justice Joseph Story, who served on the Supreme Court in the 19th century and authored leading commentaries on the US constitution, maintained that the minimum age of 35 to qualify for election to the American presidency was driven by the belief that “the character and talent” of a man (a female president was not contemplated) in “the middle age of life is fully developed”.

The architects of the Irish Constitution undoubtedly felt likewise. In 1937, Éamon de Valera referred to the Irish president’s role and powers as requiring “the exercise of a wise discretion”. Surely this is still relevant? Do 21-year-olds exercise “wise discretion”? Should they have to? Surely they have other things to be doing?

The fact that the Government has opted for this referendum, rather than chosen to have a vote on other possible political reforms discussed by the Convention on the Constitution, would also suggest an avoidance of more substantive engagement with the possibility of meaningful change. Such engagement would mean genuine consultation with citizens on how they are governed, and that is an issue relevant to all of us, not just young people.

1 The real Contagion virus is out there and it’s causing virologists to worry
2 Man found guilty of murdering girlfriend during drinking session
3 Cork shootings: Father and sons to be buried in two separate funerals
4 First full moon on Halloween night since 1955 will be rare ‘blue moon’
5 Medical gaslighting: The women not listened to or viewed as overdramatising or catastrophising
Real news has value SUBSCRIBE