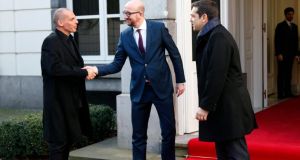 ‘Incumbent centre-right governments across Europe know that facilitating a positive outcome for the new Greek government will not assist their own prospects of re-election.’ Above, Belgian Prime Minister Charles Michel welcomes Greek Finance Minister Yanis Varoufakis and Prime Minister Alexis Tsipras ahead of a meeting in Brussels on February 12th. Photograph: REUTERS/Francois Lenoir

The word Greece will feature prominently in any word cloud of Irish political debate generated at any point between now and the next general election. Greece is going to be talked about more in our politics and our media in the coming months than the North.

That is because Greece is now the case study for the choice between anti-austerity politics and centre-right politics.

If the newly elected Syriza government in Greece fails it will do so before our next election, and the lessons learnt could inform the decisions our electorate will be making then.

Some months ago a leading Irish politician commented to me privately about how the polls suggested to him that Ireland may need two elections in close succession: one for the heart and then one for the head. He compared it to how it took two votes to achieve what he saw as the sane results in some of the recent Irish referendums on European treaties.

In his theory the first such election will be an opportunity for voters to express their frustration and anger by voting for a majority made up of disparate left-wing parties, small parties and Independents. In his view if any government emerged out of this first election it would be unstable and short-lived.

Then, in the second election, a sufficient majority of voters will come to accept the need for coherent and effective government made up of centre-right parties.

Speaking to him again more recently, however, he suggested that we might not need two elections after all; the Greeks may have saved us the trouble.

There are three possible outcomes for the new Greek government, each of which will play into our next election.

The first is that the Greek government succeeds in persuading the European Commission, the ECB, and other EU governments to write off large chunks of Greece’s debt, manages to reverse the austerity imposed under existing programmes, and somehow manages to stimulate significant growth.

It seems unlikely, but if new prime minister Alexis Tsipras manages to achieve all of this then his success in government will be a boon to anti-austerity movements and left-wing parties across Europe, including those in Ireland.

The second scenario is that it quickly becomes clear the Greek government was elected on an unrealistic premise, European leaders reject the Greece proposals to relax the debt burden, the Greek government is humiliated, the Greek exchequer runs out of money and cannot borrow, and Greece’s economic crisis intensifies.

We told you so

The third, and perhaps most likely scenario, is a less clear-cut outcome.

In this scenario the Greek government through negotiation, or in part arising from a euro leaders’ fear of contagion, achieves bridging finance next month, and then obtains some limited reduction in debt burden, perhaps by extending repayment periods. The new government compromises on some of its demands and limits its reversals of austerity policies in Greece.

If this happens then the argument will continue to rage on whether the Greek experiment worked.

While the outcome of this Greek saga is not yet clear, what is clear is that the response of EU governments, including our own, has as much to do with domestic politics in states as it does with euro-wide economics.

The centre-right governments in charge of most of Europe have no interest in seeing this new left-wing Greek government succeed. These are the politicians typified by Jean-Claude Juncker, currently head of the European Commission, who famously said when commenting on how the current economic crisis could be solved: “We all know what to do, but we don’t know how to get re-elected once we have done it.”

Having implemented various types of what they see as successful austerity programmes in their own countries they’ll be damned if they are going to let the Greeks give credence to the suggestion that there was or is an alternative way.

While they will pay lip service to the need to recognise the decision of the Greek people they will be blunt in pointing out the naivety of the Syriza position.

The economic case against giving the Greek government what it wants may be very strong but the political imperative against doing so is stronger still.

3 Covid-19: We have never seen a pandemic of this scale that was shorter than 2-3 years