Breda O’Brien: Think about intolerance of thought police before you vote 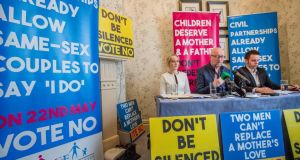 ‘This Government’s only commitment to marriage is to re-defining it to make it gender-neutral and then repeating loudly that it represents no change at all.’ Above, Eileen King, Keith Mills and Tom Finegan during the Mothers and Fathers Matter press conference in Dublin where they unveiled their new campaign posters and put questions to the Referendum Commission this week. Photograph: Brenda Fitzsimons / The Irish Times

This week a little girl was egged as she sat innocently near a No poster. She went into anaphylactic shock and, had it not been for the quick actions of her mother, she might have died.

A Yes campaigner distributing leaflets approached Manning afterwards. He explained what had happened, and the woman said what did he expect, if he was willing to display messages that should never be seen in public?

There was no concern for the little girl or her family just an insistence that there is only one way to think in Ireland, and those who do not think that way must take their chances, even if they are children.

Of course, every right-thinking Yes campaigner condemned the action unequivocally, as any decent person would.

The cuts fit perfectly with a Government that tells us every day that marriage has nothing to do with children. If you believe that, why would you help people to prepare for marriage, including the 15 per cent who already have children?

This Government’s only commitment to marriage is to re-defining it to make it gender-neutral and then repeating loudly that it represents no change at all.

That is about as convincing as if I declared the word lesbian to henceforth include straight women, and then said that there was no re-definition going on at all, just an extension to a broader category of women.

The insult to Accord is doubly galling, because the pre-marriage courses are delivered by fully trained volunteers, who only receive expenses rather than pay.

So where does the money go? It goes on venues, course materials and training in order to help prevent future marital difficulties.

Tusla, the child and family agency, has just received €8 million from Atlantic Philanthropies but could not find €400,000 to fund marriage preparation.

Imagine the investigative documentaries if there were even a fraction of the money being spent on achieving a conservative agenda. Imagine all the graphics showing the way people move from one Atlantic-funded organisation to another, quietly furthering radical agendas as they go.

Take, for example, the LGBT section of the Irish National Teachers’ Organisation, which declares as one of its purposes that it will “liaise with GLEN and other professional groups around common goals”.

Those common goals include eliminating “heterosexist bias” in schools. In January Minister for Education Jan O’Sullivan launched a joint GLEN/INTO resource on homophobic and transphobic bullying.

They suggest using King and King, described by Amazon as presenting “same-sex marriage as a viable, acceptable way of life within an immediately recognizable narrative form, the fairy tale”. The prince is only happy when he meets and marries another prince.

Then there is Josh and Jaz have three Mums. Aimed at five- to eight-year-olds, this story tells of Josh and Jaz who wish they had only one Mum and Dad, but learn to accept their new family form. One of the suggested resources is www.ellybarnes.com which promotes boys being allowed to wear skirts as part of school uniform.

For Junior and Senior infants, that is, four- and five-year-olds, the resources suggest being ready for teachable moments, such as when a child says in response to one of the picture books, “A child can’t have two mums or two dads!”

The answer is, “Some families have a Mom and a Dad, and some have two moms and two dads, but what is most important is that a family is a place where there is love.”

Children tend to be literal. They may be pointing to the basic biological fact that every child has to have a mother and father, or they wouldn’t exist, but that intuition is to be brushed aside.

Were you consulted as a parent about your child being read fairy tales called King and King? Thought not.

Think about the dogmatism and intolerance of the new thought police, the contempt for the conscientious objections of others, as you decide which way to vote.